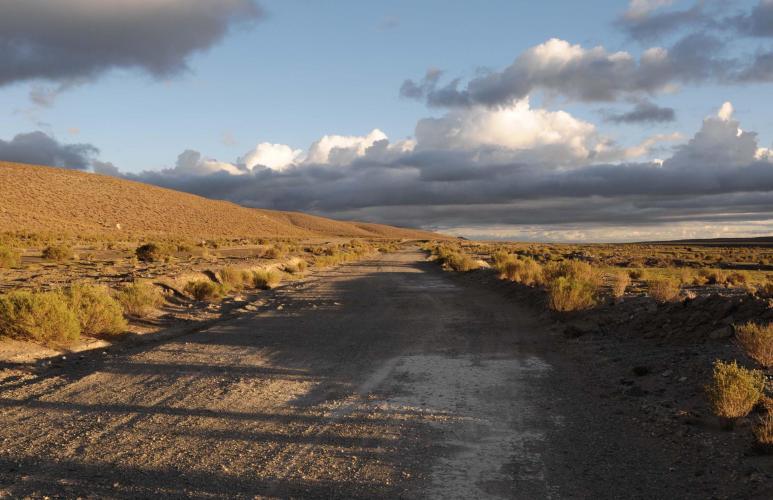 At 6:45am we were ready to leave San Antonio.We took the sandwiches Sergio had prepared last night for us and got on the track.The village was still sleeping the only sound you could hear were some dogs barking.

It was easy to find the beginning of ruta 40.The road was like Sergio(our hostel owner)told us:sandy,grave,and the worst was the extrem washboarding.Sometimes we left the road to ride at the fields beside,but as there were a lot of small bushes with a lot of big thorns it was also not really useful.

Besides often the ground was so sandy that the bikes got stuck and we had to push them.The temperature was rising up to 40°C with no shadow at all.We were very slowly-it took us 4 hours to get to El Mojon with an average speed of only 9km/h.

At least we were lucky about the sandwiches and the 10l of water we had taken with us.There is absolutely nothing to buy on the way.We arrived at El Mojon exactly at lunch time and we got home made noodles with llama goulash.El Mojon is a small spot with just about 10 houses,one small chapelle,an even smaller museum and a restaurant in which all furniture is made of pure salt.The restaurant and the museum is run by the family of Sandro LLampa. He began also to built a small hostel, all of Adobe, which is a very common material to built houses in this area. Adobe has amazing climate regulating attributes, it keeps the house warm in winter (up to -30°C in this region) and cool in summer.

So far Sandro only managed to built the walls of the future hostel-no roof and nothing inside. They offered us to be the first guests in it, and we put our sleeping bags on the ground in a shady corner.In the afternoon it became extremly windy and as the sun got down, the wind became cold.

We asked if there was a possibility to sleep in the restaurant and it was not a problem. So we didn`t have to put our tent.Sandro joined us for a chat at dinner and we had a real nice evening with the family, especially with his cude 5 year old son.