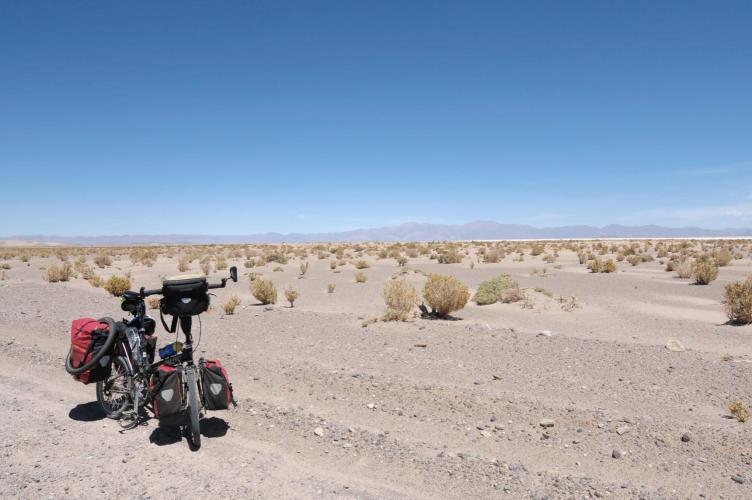 We continued our R40 experience at 6.30am. The road unfortunately stayed as it was yesterday, even worse. Often we had to push the bikes to go on, because there was so much sand and never ending washboard terrain. We used an argentinian and a german map, and in the german map a village called “Tres morros” was supposed to be the junction to Purmamarca already.

Arriving there it was just four houses and a small chapel-no junction at all. We drank some coke and ate a few cookies noticing that there was only a little water left from the many liters we had taken with us

There was nothing on the road but some wild donkeys, but as we could already see the “Salinas grandes” on our left hand side, we knew that the junction to Pumamarca couldn`t be very far. When we arrived there were only some traffic signs, nothing else.

Our plan originally had been to arrive at Purmamarca in the evening, but the sign said we would have to pedal another 60km to get there. Besides in between there was a mountain pass of 4170m height. We decided to go on for a little while to find water somewhere and than look for a place to sleep or to put the tent.

After 10km there were a couple of houses about 500m off the road. We decided to ask there for water and maybe a place to sleep. At first there was nobody, not even a dog, real abandoned and a little bit scary. Suddenly out of nowhere there was an Indio chewing coca leaves and asking what we were doing here. We had some of a really nice, small chat and he unlocked the big room where their community gathered normally.

At this time they were all in the mountains with their animals, goats and sheep. The guy showed us the place we could take water from, and it had a very salty taste because the “Salinas grandes” were quite near. We cooked some noodles, drank some coca tea and went to bed early.