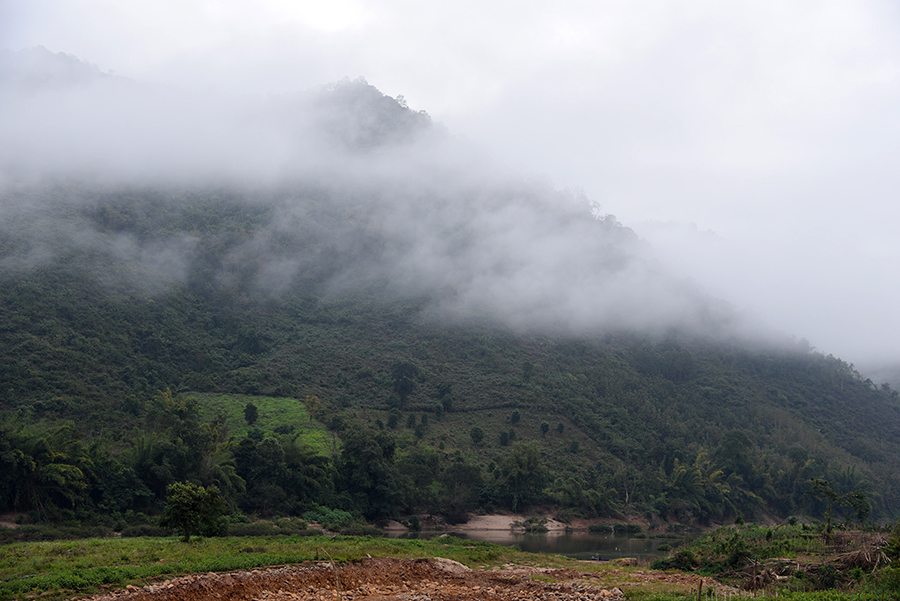 All night some fan was turned on and as it was so loud I didn’t sleep very good tonight. At 5:30 I already was awake. 6:15am I was pedaling and immediately the first hill was there greeting me “good morning…”

It was already warm. The temperature was about 21°C and it felt very good riding with a shirt on only. I really had missed this. The road was going along the river Nam Ou and the landscape was like mystic.

These misty mountains produced a magical atmosphere. I needed to control myself not to stop every couple of meters to take some pictures. It was just awesome!The road continued going up and down. I could still feel yesterday’s ride in my legs.

The total climb of 660m was enough for today I decided and I felt tired, too as the night had been very short due to this f… fan.

It’s amazing how the China is investing here. They are building an hydropower power plan and I realize how some Laos people start to sell their land or rent it at least. Like everywhere these rather poor people want to take the chance to make fast money.

Everywhere you can see signs “land for sale or rent”. I doubt if China really brings some welfare to the Laos people….. I saw them building neighborhoods for the Chinese workers, so they only seem to employ their own people. Time will tell.

About 15km before Luang for the first time I drank a coco nut milk. I felt so lucky that I found it, I just love the fresh taste which kills immediately all your thirst. A guy from Austria came, but he was heading to the north.

I got to Luang about 12 o’clock and I checked in in the guesthouse “Rattana”. They have a nice room – but for only 2 nights. I stayed, and after I will see.

I took a shower and a power nap. After I went to eat, returned to the room at 9, drank a beer and I fell asleep like a baby.