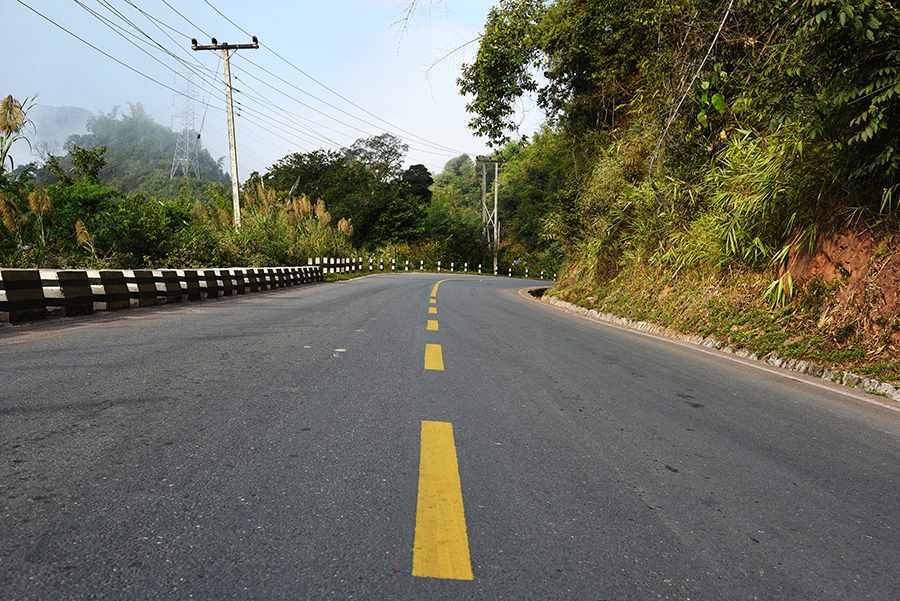 Nothing new – at 6 o’clock the alarm rang and at 6:30 already I left the guest house. The weather was much nicer then the days before. Warm, something like 17°C.

The road was empty and I could really enjoy riding. The climb today should become really hard but the views were amazing and compensating the effort. The highest point I climbed onto was 1250m high and at last I had climbed 1225m today because many times I had to go up and down.

The smaller downhills in between the climbs I enjoyed, but what bothers a little bit is the knowledge that while you are going down the next climb is already waiting for you….

At the end I was rewarded with a fantastic downhill that I really loved!!
Today I discovered why the road leading downwards is sometimes wet without any drop of rain. I always wondered why this is.

But now I know, haha. It’s because the trucks have got a water tank and when they are driving down they spray water onto their tires and brakes so they won’t get overheated. This is not really my problem, and I’m so happy about it – I rarely use my brakes when I am going downhill.

One of the climbs was really steep today. I was passing a village and I was going real slow. A little boy – maybe he was 4 years old – ran out of his house enthusiastic to give me a “high 5” and after he pushed me from behind for about 200m. That was so sweet and he was so cute.

In the middle of the next climbing stretch I was stopping to relax and eat something. A girl from China traveling on bike, too appeared and we chatted a little bit. She cycled on and I met her again on the top .

The road was leading down to Paksong. Initially I had planned to stay here. I just checked the around when the chinese the girl rode by again and she told me that she would keep going as there was still a lot of daytime left. So she went on just like before.

I looked for some guesthouses around but couldn’t find one that I really liked. It was 3pm. I thought what to do, bought some drinks and decided to keep on going, too. On the way I passed a lot of guesthouses. I recognized the girl’s bike standing in front of one, so I thought “ah, she’s staying here” but I was in the mood to cycle on. I kept on riding and the road was so nice. I enjoyed. I was going parallel to a river and the sun was going down slowly – very beautiful scenery. Suddenly the guesthouses on the roadside seemed to have disappeared.

I checked the map and realized there were not any city’s ahead any more. Ok I thought, I will ride on till it gets dark and then we’ll see. And there it was: my guesthouse appearing in the middle of no where like magic. It even had a restaurant attached. Nothing special, very basic but I was very happy.

I took a shower – a hot one! – and afterwards had a wonderful dinner. Rice with vegetables, very delicious. Can you ask for more???
Finally, the day ended with some journal work for me, and at 8:30 I went to bed.