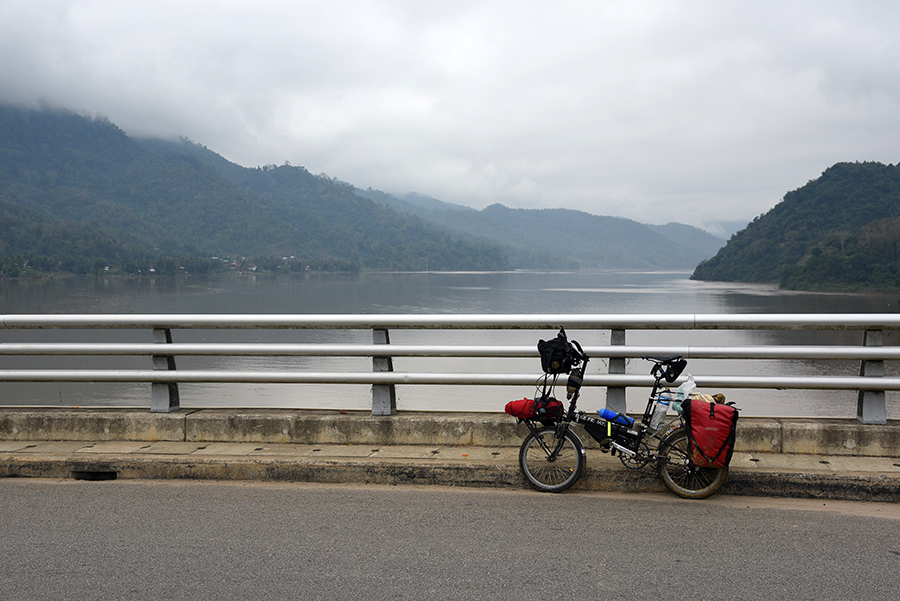 Today we woke up late at about 7:30am. We were lucky the guesthouse gave us a hose and we started to clean our bikes then. They were so dirty and the dry mud was already hard like stone. Hard work!

After I helped Hernan to adjust his gears. He found they were not working properly because he couldn t change the small plate in front. It took us while until he discovered the reason of the problem. Some dirt was blocking the shifter…..

We checked all the screws, put some oil and  were ready to go.
At 10:30 we had to say good-bye to each other. Everyone cycled on his own way and we left in different directions. Hernan, my friend, take care, have a safe ride and may all your dreams come true.

I cycled on and the road was busy with some Chinese trucks. I’m already used that the road is going up and down. In this part of Laos I never had a route that was flat. I took it easy and I was enjoying the ride as I knew it would be a short one. I crossed the new built bridge over the Mekong that it is not even showed in Google map, yet.

I stopped for a drink at a small shop. There was a little girl inside and in the beginning she was shy. After she began to talk some words in English and then even brought me her school book. I was an English teacher for 15min, haha can you imagine!?
I reached my destination early and I checked in in a guesthouse called Bounvong Guesthouse. I went to have some lunch and on my way back I strolled through the market. I bought one of these cheap chinese head torches everybody uses here, even on motorcycles.

We will see how long the batteries will last…. On the market you almost could buy everything –  frogs, birds, crabs and some larvas I really haven’t got any idea what the hell that was.I came back, took a shower and did a power nap. Later I went to the same place to eat some rice and chicken again.

I did the journal and at 11pm I went to bed.

2 Antworten auf „Muang Nan-Xayabouri: Short ride but still going up and down“