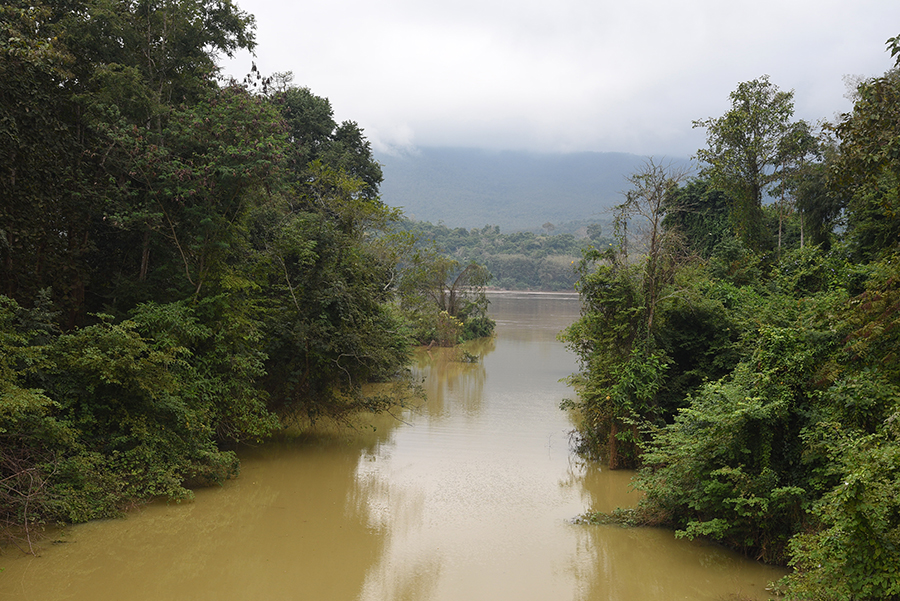 As usual got up at 6:30. I went to pick up Hernan at his hostel but he wasn’t ready – still having breakfast. So finally at 7:45 (already very late for me) we were leaving Luang Prabang.

We did a short stop by the market place and bought some fruits and bread. At the beginning pedaling was easy. The road was paved and it was nice to have company. We were really having fun and talking a lot.

At a gas station Hernan bought some gas for his stove and we thought about which way to go as the gas station was right at a junction. I said I think we should ride on on the paved road which was climbing up. We took it easy and started to climb.

There were a lot of tourist vans passing us by while we pedaled up all the way up to the top. At the end the road finished at some waterfalls. Nowhere to go on…. shit happens!!!! We laughed like crazy. As we obviously had taken the wrong direction we went downhill very fast back to the point where we started. At the junction this time we took the dirty road leaving the paved one.

At the beginning the road was OK. Sandy, but still we liked it. No traffic at all and beautiful landscape. After some kms unfortunately road conditions got really bad. It had been raining a lot during the last two days and so we had to fight our way through a lot of mud and a lot of large puddles. We were riding along the Mekong which was fantastic, just awesome.

We had a lot of fun crossing the puddles and struggling with the muddy ground. Sometimes they were very deep and almost half of my panniers disappeared in the water. Soon we were all dirty and smelling like pigs.This was not at all a road. It was going up and down and sometimes we even had to push the bikes while going up because there were huge rocks and the gears sometimes – dirty with all the mud – were just sliding and you couldn’t change from one to another.

In the middle of the way I realized that we would not make it to Xayaboury, our destination for today. We were going so slow and every 200m I had to clean my front wheel as we were crossing constantly those road puddles. The wheel was completely blocked because of the mud stucking underneath the mudguard.

Slowly it was getting dark and Hernan wanted to camp somewhere. I convinced him to keep riding because I knew there was another village coming ahead. We kept on riding in the darkness…..When we were getting closer to Muang Nan there were a lot of banana plantations and also some motorbikes appeared. We knew what this meant: almost there!!!

At 8 pm we finally arrived in the village and we looked for a guesthouse. We really felt a little bit ashamed because we were all dirty. Finally we found a place with a chinese owner who didn’t care how bad we looked. We even could take the bikes inside with us.

First of all we went to look for food. Everything was already closed so we could only buy some eggs and fish cans. What can you do?? We cooked the eggs and each of us had 3 eggs and a baguette for dinner. We took a shower and feel a sleep like babies. What a day!!
The total climb was today 1020m .