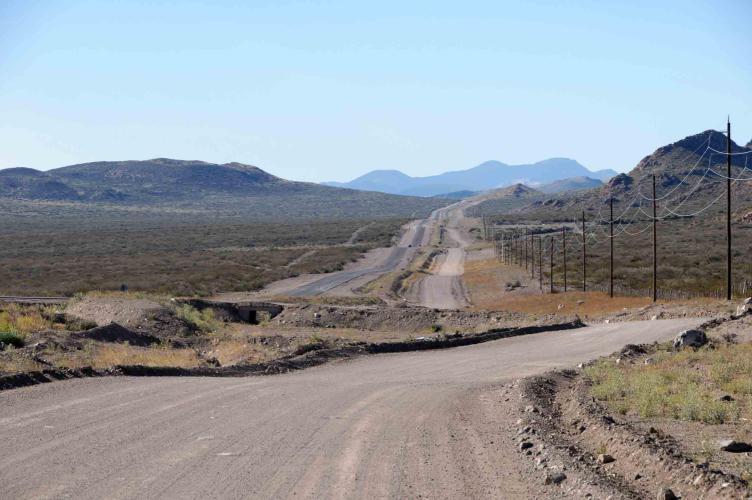 As soon as we started the wind was blowing in our faces. From the beginning it was hard to pedal and the wind got stronger and stronger and always contrary-well at least the landscape was beautiful. The road in general was climbing up with a lot of little downhills in between, so we did a lot of height meters before we reached the altitude of 2000m.

Together with the strong wind a tough ride. Just before reaching the “Cuesta del Chihuido” there is a small small mountain refuge at the “Cascades de Manqui-Malal”, some small waterfalls inside the mountains where people can do some hiking tours or go to swim. Here some guys run a very small restaurant and offer a place to sleep. All very basic, but nice people.

We ate something and had a break to recover a little bit from the exhausting up-climbing. The guys told us, that the wind would blow all the way to Bardas Blancas like this, and that we had to face a steep climb up to the “Cuesta”. “This is going to be tough” they said, well, we guessed that already.

We found that climbing up the “Cuesta” wasn´t that hard, because again we had that breathtaking surrounding, it was just awesome. After the “Cuesta” the road was going up and down like before and as the guys told us before, the strong winds would never stop, not for a minute.

Finally we reached “Bardas Blancas”, and everyone was happy to arrive. Although “Bardas Blancas” is a very small spot, existing of only a few houses where electricity finally arrived in 2009, there was a real hostel!! Incredible! In the end from outside it looked a lot better than inside, and as usual the toilet didn´t work, but anyway we had a place to sleep after this hard day. The friendly owner was cooking something for us, and so we went to sleep with our bellies full!! Wonderful !!