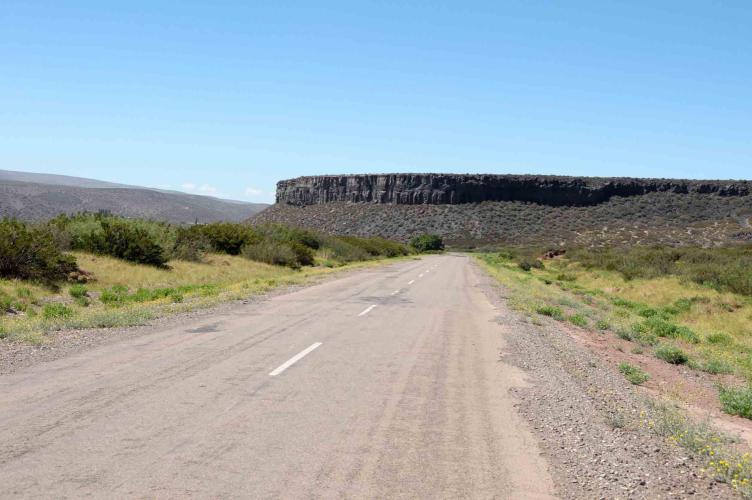 We took it easy in the morning and started after having the argentinian breakfast at about 10.30 am. People already had told us about the bad condition of the road after the first 65km of pavement. We pedaled easily at first as there was no wind like yesterday, just a little breeze-nothing.

The landscape again was beautiful, some small animals on the roadside, so far an easy ride. We arrived where the pavement ended, and we decided to go on first, although he road consisted of big stones, a lot of sand in between and all loose material. We maybe went for 5 km and we were so slow, that like this, it was clear that we would never arrive at “Buta Ranquil” the same day, as we knew that the road would continue like this for 50 km. So we decided to do some hitch-hiking.

We were lucky – after a short time we could stop a pick up that was willing to take us with all our stuff. Richard, the driver was working for a petrol and was on his way home. Although he wanted to get home as fast as he could he took his time (minimum about 20 minutes) to load our bikes and our bags.

Well, when he started to drive we noticed exactly, that he wanted to be home very soon, because he went at an absolutely inappropriate speed. Finally in a curve he almost lost the control over the car as the car was like “swimming” all the time on the loose ground. For him this moment of shock wasn´t exactly a reason to slow down and besides before the curves he always went on the wrong side of road.

Like this, he could pass the curves without slowing down, but he as well he couldn´t see if somebody was coming towards us after the curve- well for god´s sake nobody came, and after some 113km we arrived save. A nice and likeable guy, but a horror driver.
At “Buta Ranquil” we found a nice hotel and had a nice dinner,too. A good end of a long day!