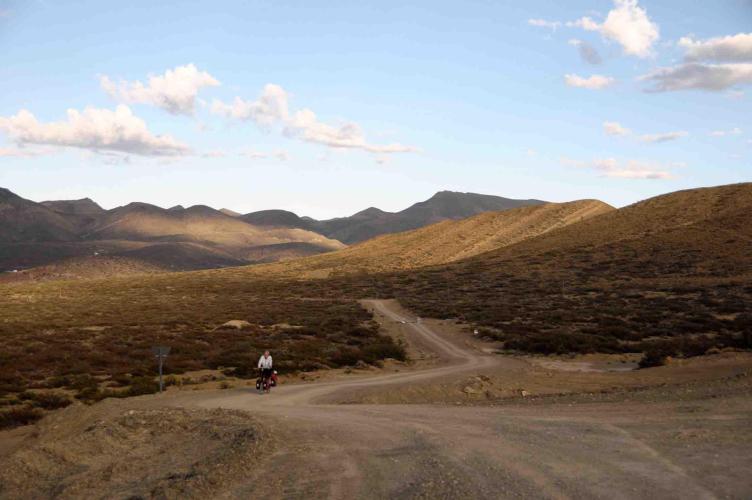 We didn´t get to much sleep that night. Not because of our “beds”, but because some dogs were barking all night long and the cocks did their “cock-a-doodle-doos” at 4 o´clock in the morning already. So we started as soon as the day broke, taking with us the food that was left from yesterday. In “Chorriaca” there is no possibility to buy something least of all at this time of day.

The road was climbing up and down as always-nothing special and the winds very soft that day. We already were about twenty kms from “Las Lajas” when I noticed some broken spokes at my son´s bike. The wheel already was running like out-of-center and with the heavy load we had to face the fact that with this bike he couldn´t go on pedaling without damaging the whole wheel rim.

So we began to walk some kms, pushing the bikes. We hoped to find someone who could take my son with the bike to Las Lajas, but there was hardly any traffic at all. Finally we could stop a pick up with a cabin above-a german couple from “Leverkusen” who also was going to “Las Lajas”. They were nice people although in a way, they were typically german. Their first thoughts were how to transport the bike without scratching the furniture of the cabin inside. That really was their biggest concern.

We tried to find solutiones like wrapping the sleeping bag around the bike and so on, but in the end the woman found an old sheet they could wrap around the bike to protect the furniture.
So me and my wife went on by bike another 12 kms to “Las Lajas” and we met there again with my son.
“Las Lajas” is a very nice village with friendly people, a really nice camping and some two or three hostels. The one we went, offered a nice room like a little apartment with all the comfort of TV, van, hot water and so on and for a fair price.

The owner was a freak of historical geology and showed us all type of fossils and petrifactions he found in the mountains around “Las Lajas”. His dream was to find the bones of a dinosaurier one day and to organize geological trips for tourists around “Las Lajas”. It was very interesting talking to him and he knew a lot about the region and its geological facts, e.g. that all the region formaly was under water, an ocean.

Well, in the evening we took the bike to the bike shop and they fixed it quite well. The owner was crazy for the wheels “Marathon Schwalbe” which you can´t get in all of Argentina and cost about 100 USD if you should find a way to get them somehow. Maybe we should have brought some of them here……