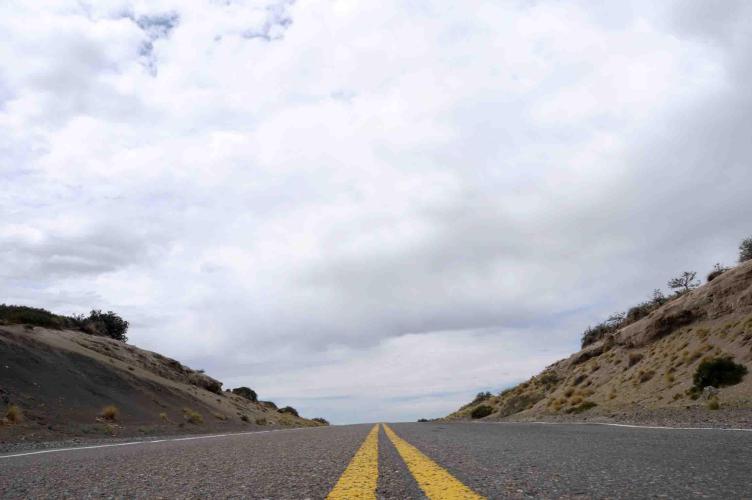 We left early in the morning, and the road immediately was climbing up. “Chorriaca” lies almost 500 m higher than “Chos Malal” and so we expected some climbs anyway. The road was o.k. just a lot of ups and downs all the time and the weather looked like it could be raining. Beside the road we saw a small cat someone surely had just left there, and it was crying so loud and desperately that one´s heart could brake.

We stopped to give it some food and water and tried to take it with us to the next village, which actually was Chorriaca,but it always jumped off the bike. Finally we had to pedal on and the cat was running after us for 500m still crying. It was so sad to leave this small, helpless animal behind no one would say a word for some time…Later on the wind was blowing stronger and it was quite fresh. We reached “Chorriaca” (4 km off the Ruta 40) just when we were hit by some first drops of rain.

The village seemed to be empty, no one on the streets. We stopped at the police station to ask for a place to sleep, but also couldn´t find anybody. A woman was coming towards us and she told us where to ask. The guy was the one responsible for the sports hall, and offered us to sleep in there. We were happy that we weren´t forced to put up the tent, for still it looked like rain. In the sports hall the guy told us we could use the facilities although there wouldn´t be water.

The village was provided with water only for two hours a day and so we fetched a big basket of water he gave to us to use in the bathroom. Besides he wanted to give us ten liters of drinking water for free but we payed him because that´s an offer you can´t accept without having a bad conscience. There also was a small kitchen, and later in the evening we used the water to cook some noodles. They tasted wonderful and we were surprised how happy one can be living in an empty sports hall !!