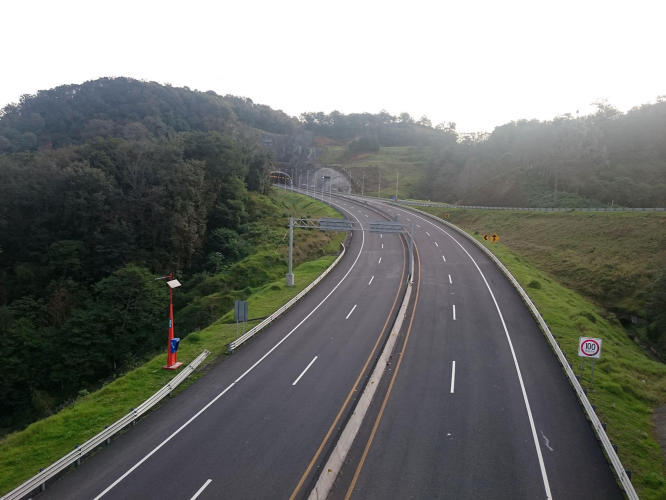 Business as usual: at 6am I was pedaling. After 100m the road started to climb already although I only was searching for the right street to take. It took me like 50min to find it, and at that time I was already sweating like crazy – and the temperature was only 9C°!!

The road I had to take was climbing slowly. Up and up it went. Like Yesterday I was very happy like when the sun came out, but today it couldn´t warm me up that much because of the height. I was at about 2400m altitude and so the wind was quite cold.
The landscape was beautiful.I pedaled in the mountains and sometimes there were some small villages I could see from above the long bridges that were crossing the valley.

Like many times before I had to take the toll highway in between, a very new one, and it kept on climbing. I was going very slowly. Suddenly a guy with a pick up appeared: the rescue man from the highway. He stopped beside me and told me that the federal police had called him. They send him up to me to inform me about the fact that they won´t allow me to pass the toll booths and that I should go back. „No way“ I said, he suggested to show me where the free road was to find from here.

There was a bridge to come and up there, there should be the free road. He said he wanted to wait for me at that bridge. Ok then. I cycled there and it turned out to be so difficult to leave the highway that in the end we put my bike on his pick up and we passed the toll booths in his vehicle. He took me in his car for about 8km all together. Then he helped me to take off my bike and I kept going.

I arrived at Perote early and I starteted to look for a place to sleep. I met a small boy he said „I´ll take you to the hotels“. In return he wanted some money for a coke. I told him I don´t needed a guide but he was running close to me. Somehow cute. The first place I went to there was an old, unfriendly man. Immediately he said „You can`t take your bike to the room“ so I said f..off and I left. Since I´ve been traveling here in Mexico nowhere they forbid me to take my bike to the room – even in a 4 star hotel with elevator.
So I looked for another place and the small boy was still running close to me….

I found a brand new hotel a little bit out of town. Very nice, everything clean. I only had to ask for a heater because in the room it was about 13C° less than outside. Thanks god they gave one to me! After a warm shower I went downtown. This city is small but very nice with a good atmosphere. Like everywhere in Mexico there is the zocalo with some cafes around. I ate some elotes here and drank a coffee. Later I did my usual shopping at the supermarket and we will see if tomorrow I can get to Puebla…