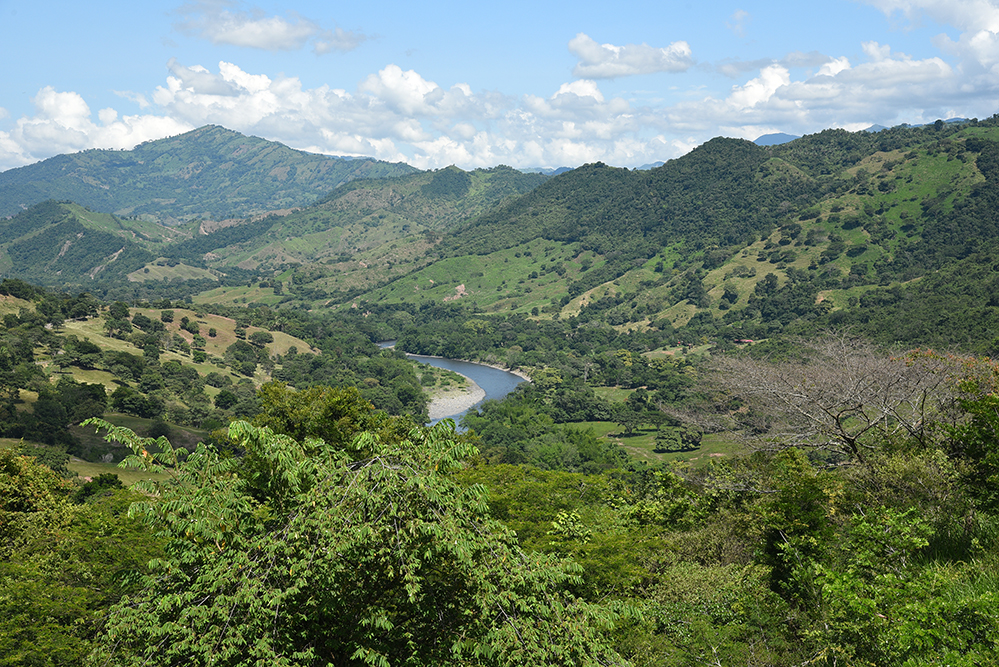 I had set up my alarm at 5:30am but I already was awake at 5 o’clock. I closed my panniers and was ready to leave at 6 o’clock.

When I wanted to get out everybody was still sleeping and the gate of the hotel was locked with a chain. Hmm. What to do? I looked around and I found a second one that I could open. Lucky me.

I started pedaling and like Fernando said the road started to climb immediately. There was a lot of traffic and some time it seemed to be the rush hour. It was not very nice to cycle although the landscape was really very epic and beautiful with the mountains hiding in the clouds.

The road climbed for about 20km. I was happy to finally start with the downhill but it was a little bit spoiled due to still heavy traffic and the vehicles moved only very, very slow. Trucks, buses, cars, motorbikes – everything. I always could find my way to move between them and was passing almost all of them…. Still I needed to be careful because the road only had 2 lanes. I was fast and after another 17km I was already in Guaduas.

I was happy then because Fernando had told me that from here it would be just flat roads,  no more hills. My dear friend Fernando, that’s not what it was, unfotunately!! Could be the columbian flatness of course, for columbian cyclists like you my friend !?! What I found was that the road kept going steadily up and down in small hills. Exhausting but at least the landscape was amazing. Awesome.

Kind of a problem turned out to be that after Guaduas there were no more shops or gas stations where you could provide yourself with water or food. Nothing.

Like always due to the weight I didn’t carry too much water with me. 20km before my destination “La Dorada” I was more than lucky to find a restaurant where I could get something to drink because I already started to feel shitty.

So I did a break, drank cold coke and  bought some sugar cane – Panela. The guy there told me this is the best thing ever for cyclists and  from this all the colombian cyclists gain their energy. Well I’ve got nothing against it, I guess.

The thing seemed to work…. I was speeding up towards my destination. Cycling was easy, I listened to some music and I was very motivated again.

After 8 hours riding and climbing almost 1600m of altitude I reached the city of La Dorada. I looked for a hotel and finally checked in at the Hotel Bella.

I had a shower and then went downtown to get myself some cash. Man I really was hungry!  I ordered some chicken. To my  surprise it was fried which is not exactly my favourite but I was so hungry I would have eaten anything.

Back in my room I did the blog and at 21:30 I went to bed. Seems to be my sleeping hour…We will see where I’m gonna go  tomorrow