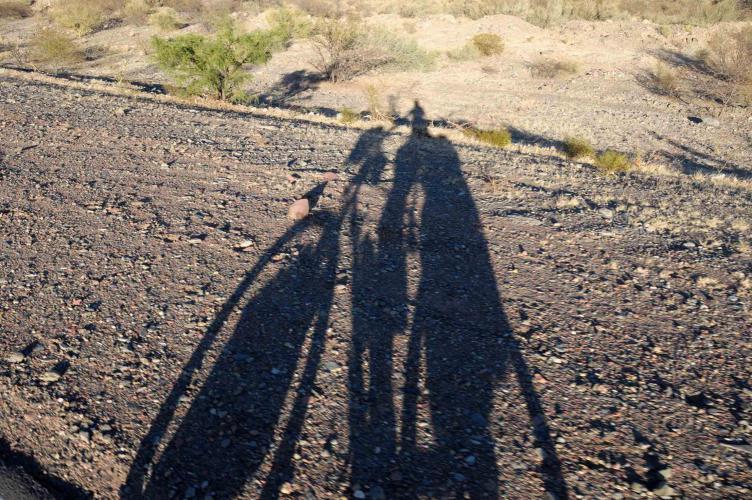 As we were already experienced with the heat, we started at 6am to ride some time without having the sun. The road was going straight and wouldn´t do a curve for eternities. The surrounding was awesome with mountains and the sun slowly rising, we enjoyed the riding. Slowly temperature was rising but still one felt comfortable.

We met another “crazy guy on a bike”, an Italian who was going the other direction up to Villa Union and stopped at the little village of Guandacol to have something to eat-the last spot before Huaco. We went on after having some spectacular self-made sandwiches of cheese and tomatos. Temperature again was rising and rising and it became quite hard to cycle on in the almost unbearable heat.

All our water was hot like tea, and so in one of our numerously breaks we decided to prepare some Mate with the water instead of drinking it like this, and it was perfect!! We stopped some cars to ask for cold water and almost every car we waved at was stopping and providing us with fresh water-really unbelievable how nice and friendly are people here. One gave us 5l of fresh water-heavenly! By the way, we arrived at 51°C.

After 103km a mobile home stopped and offered to give us a lift for the next 15km and my wife and nephew took the opportunity as they felt very exhausted already. Me and my son kept on riding and we met again after 15km doing the last 6km to Huaco together.
We finally arrived at a small but very friendly and nice hostel with a beautiful garden and even pool. The owner prepared a delicious meal of chicken and spagetti for us and afterwards everyone just fell into bed. A really tough ride today.