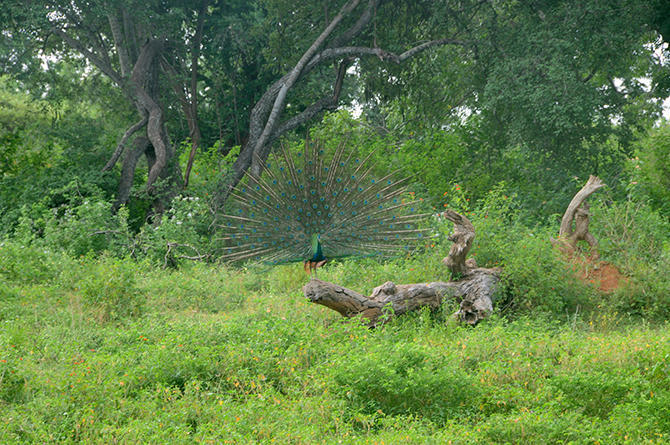 The day began with a real peacock-show. Beside the road there were four or five peacocks trying to impress the females that were around. They opened their beautiful feathers and moved their backs up and down as if they already were in action. For a while, we enjoyed watching them and then headed towards the short stretch of highway (maybe 20km long) direction Tangalle.

A quite big waran was crossing the four lane street right before our eyes-what a beautiful animal! It reminded us of a long lost and forgotten world once upon a time. We loved to watch how this little saurier-like monster moved and we prayed that there would no car be rolling over it, but it reached the other side save and sound.

The weather turned bad and it started to rain. First just a little bit and then it turned out to be heavy. Just then appeared a little abandoned stand beside the road where we could find shelter from the rain. Within half an hour everything was over and the sun came out again with all its strength, the vapor of the wet street made us feel like in a steam bath-amazing!

Back on the normal main road we cycled without difficulties towards Tangalle. As the day was a day off here (some Hindu full moon celebration), a lot of people were on the street and so was the traffic. Some 20km before Tangalle the road was going constantly up and down, what was exhausting because of the totally humid air.

In Tangalle we stayed at the “King fisher guesthouse”, which is a good location right on the beach, but rooms are very basic, especially the bath room with an open canalsation (!!), and the food to us seemed overpriced. But the owner is nice (she´s married to a german guy and speaks very good german) and we decided to stay one day to relax.