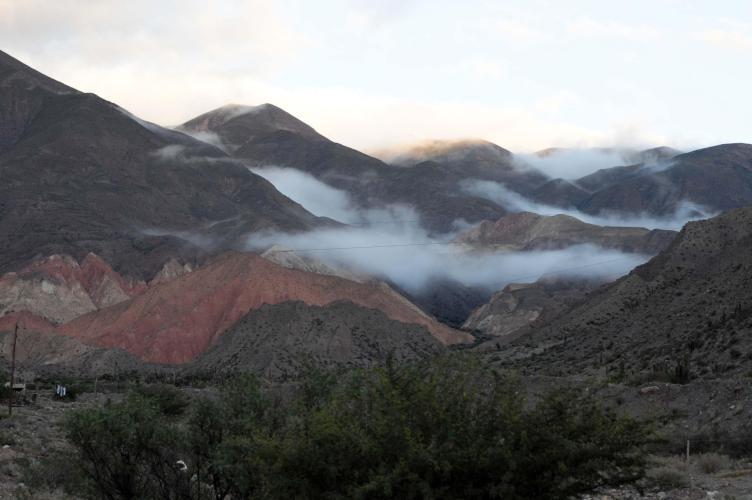 Provided with two sandwiches from our Hotel at 7AM we were on the road again.Traffic was increasing so we had to watch our mirrors very often to avoid getting hit from a huge truck or a bus, that pass you quite near sometimes.

Lucky that the road had some shoulders we could ride on. The landscape was just beautiful, with different colours of the mountains that were reflecting the sunlight and clouds below the mountain peaks. We met to other cyclists from Belgium on our way to Jujuy, we had a small chat but although we had the same route somehow we lost them. (Small wheels go fast, lol).

Passing the small village called Volcan began an amazing downhill to Jujuy. It was so foggy that we just could see some twenty meters. Although you couldn`t see very much we were going fast and reached 60km/h speed, what a ride! First we planed to stay in Jujuy, but we didn`t like the town too much, so we decided to continue on the road “Camino de cornisa” to Salta. The “Camino de cornisa” is a small and narrow road that is winding all through the Jujuy Yungas and it`s fucking beautiful.

Some steep climbs followed by curves and curves that seem endlessly, all going up. We got caught by a short but heavy rain wich left us wet to the bones (my wife didn`t even have a rain jacket and was trying to protect herself from the rain with the tent footprint-without succes. She got comfort from an argentinian guy riding the other direction and wearing only a T-Shirt.) At the top we put dry clothes for the downhill and about half past eight we arrived at a small town 26km before Salta “La Caldera”.

Here we found totally unexpected a beautiful colonial and quite luxury Hotel, called “Hotel La Caldera”. As we had been riding for 160km already we decided to stay here for the night wich was a very good choice as the hotel was not expensive and the room had a heater so we could dry all of our wet clothes. After having a hot shower we had a wonderful dinner with empanadas and a huge steak. Of course not to be missed the bottle of Malbec…