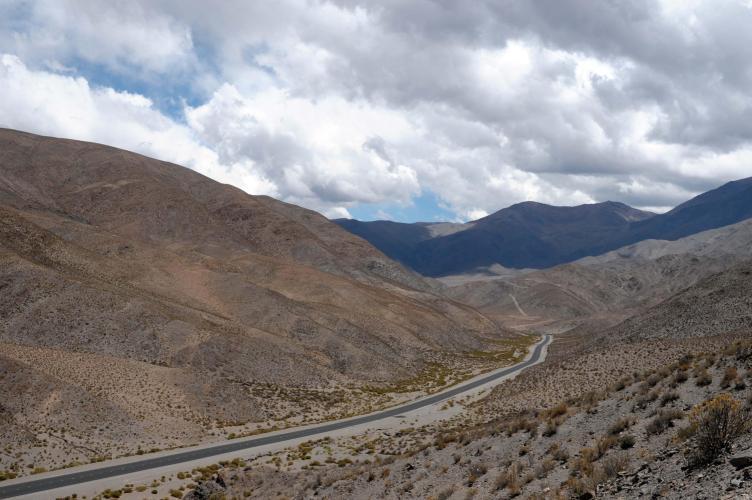 We started at 6 AM with only 13C° and almost not traffic on the road.As soon as the sun came out the temperature was climbing up and so did the road.The higher we got the more we could notice the dramatic change of the landscape.

Since we passed 3000m the color of the vegetation turned from green to brown and still we had to climb up 1000m more.At noon we stopped to eat.We had carried some noodles that we cooked the day before in the hostel.As we carried them in a ziplock bag on top of the rear rack the sun had warmed them up for us.

What an awesome lunch!! A little bit unusual cooking, but it provided us with the energy we needed to climb up the rest of the following steep curves to the the top of 4080m, the ABRA BLANCA.

After taking a lot of the typical pictures of the top, we put all of the warm clothes we were carrying (wich in fact weren’t so much)to get ready for the downhill to SAN ANTONIO.In the end we felt a little bit betrayed of the fruit of our work, because after more or less 6km the road was turning into the well known argentinian gravel track.

We could only go slowly wich was not much of the downhill we expected. Anyway we reached SAN ANTONIO DE LOS COBRES after 20km like this at 5 PM. At the entry of the city we met a guy who suggested to us to stay at a private house who’s owner had prepared some of the rooms to rent them to tourists.It was actually a very good choice because the only hotel in town (Hostal”Tren de las nubes”)is overpriced and other cheap accomodations in town have only shared dorms and bathrooms.

The owner Sergio Avalos not only serves excellent food prepared by his wife Roxana, but also is extremly friendly and helpful. He provided us with a lot of information about the roads and the region.