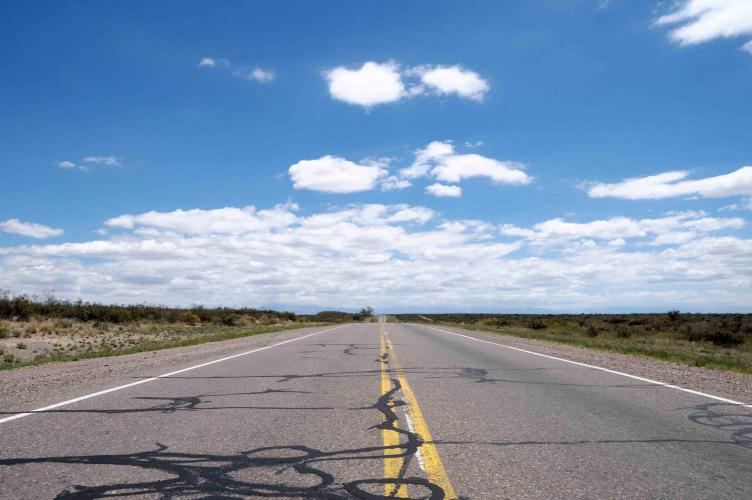 We started at 7:30, bought some water at the gas station and pedaled through the village to reach the main road. There was a lot of traffic and the road had no shoulders. In Argentina that means you leave the road however you manage when the heavy trucks or buses want to pass you-or they´re just going to roll over you.

So the first kms were not exactly a pleasure to pedal. Getting farer away the traffic got less, but since the beginning the road was climbing up and it went on like this. Besides we had to face contrary wind all the time, so it took a lot of force climbing up. We ate a lot of the bananas we had taken with us (all together 3 kg!), the only reasonable food we could get in San Carlos to take with us.

Finally the road kept on climbing up for 65 kms and at noon we already were running out of food. Temperature was rising up to 41°C and after we reached the top there was no downhill waiting for us, but the road kept on going just slightly down more or less at the same level we had reached climbing up. So we couldn´t relax just rolling down, but had to pedal on with some soft ups and downs of the road.

All of us were hungry like hell, but nothing occured on our way, not even a fucking kiosk. Well suddenly I remembered that sweet Matilde had given some homemade pickled artichokes and some apricot jam to us as a souvenir. Wow!! We stopped immediately, unpacked the things, and I felt like that stuff saved our lives, in that moment it tasted better than anything else we ever ate before! So we continued until San Rafael and here the odyssey of finding a room began.

We had to check out more than 5 hostels and hotels before we could find a room for it was the week end and everything was occupied. At 9 o´clock we finally checked in a central place called “Hotel Rex” a colonial style old house with a nice inner courtyard.