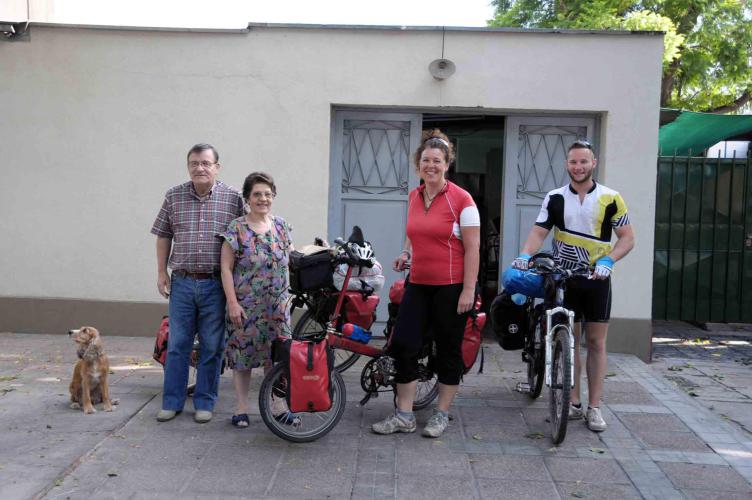 Of course we had breakfast in Matilde´s house before we packed our stuff to leave for San Carlos. The farewell was emotional, Matilde was crying and so did we. In these few days we really felt part of their family and before we didn´t know each other at all!
On the first stretch out of Mendoza the road was like a highway- two lanes for each direction and a lot of traffic.

After 10km we saw someone waving at us from the other side-the daughter of Matilde stood with her car next to the highway to give us a last good-bye greeting. We really felt so affected, these guys were just unbelievable!
Passing by the town the road was getting smaller and there was less traffic.

We were riding fast and had a nice lunch break at the little town of “Tunuyan” 25km before San Carlos. Arriving there, we asked for a Hostel on the road and a woman came towards us showing us a real huge grasshopper she had captured. It was kind of a weird welcoming….

In the end we had to search for a place to stay like for 2 hours, because all the hostels and hotels around were booked out. We would have guessed that in a small, sleepy village like San Carlos where there is absolutely nothing to do, they would be happy to have somebody staying there but instead of it we were happy to find a place at last. The hostel called “Rosengarten” was founded by an austrian owner and was a real nice place with pool and the german shepherd “Otto”.