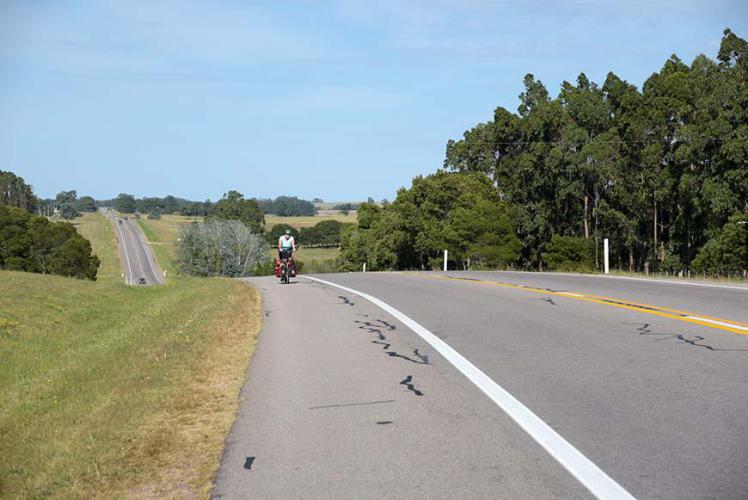 Wow, what a highway today-but we chose the shortest way to Rocha, to get to the coast quickly. Well, so let´s do this!!

Riding on this big road in fact wasn´t too bad, there were wide and comfortable shoulders on both sides of it, and the traffic was o.k.
We had a break at a bus stop (heavenly shade!), and suddenly two guys- also on bikes- appeared. They were cycling the coastline of Uruguay down and then crossing with the ferry to Argentina, BsAs. One of them had cycled big parts of Europe already, he loved Prague and had cycled the pilgrim way in Spain that ends in Santiago de Compostela. He really knew a lot. It was nice to talk to them.
We went on and the temperature rose to 38°C. It really felt hot. Just when we were running out of water (we usually have enough with us, but when it´s so hot you just keep on drinking all the time), there were a lot of these big 5l platic canisters lying on the road. Seemed they had fallen from heaven, but actually they had only fallen from a truck-good luck for us anyway.
When we arrived in Rocha, we noticed that hostel prices seem to rise the nearer you get to the coast. With each km you get closer the price for the room gets higher. We finally found one at the average costs, the “Arrarte hotel”. Tonight we will cook some noodles for dinner-hunger!!