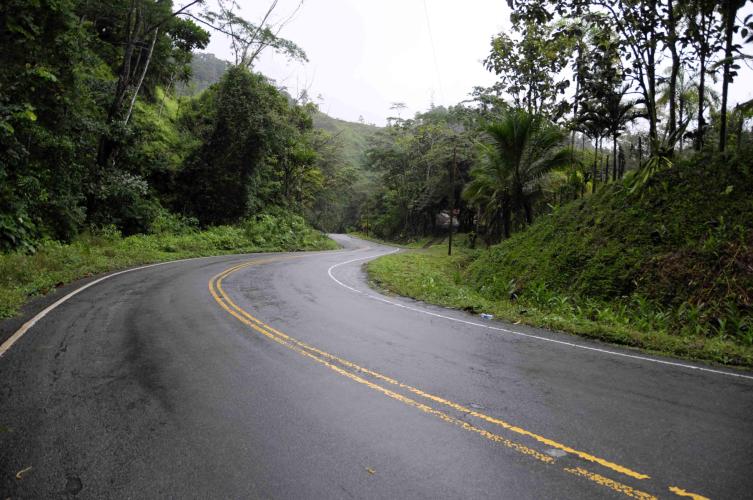 We started early in the morning at 5:40am in the dark. Though the lights of my bike are really good, for my wife Anette found it kind of weird to cycle into the jungle in the dark and she said she considerd it quite scary.
But at 6:30am daylight began and she was happy. Almost at the same time it began to rain and it developped into constant, heavy rain that wouldn`t stop for houers. Our rain jackets are of good quality but after hours of heavy rain they gave up their resistence and left us all wet inside…. We had a breakfast break beside the road, pulled off our shirts and wrapped our cambodian Khmer scarfs around us putting the shirt on again.
That didn`t stop the rain of course but we felt a little bit better like this. Well, the road kept climbing up and when the rain stopped in the end, we already had climbed a big part upwards. There were small waterfalls beside the road and a lot of espectacular views looking down the mountain, but it was a very tough ride moving up.
Sometimes the climbs went up to 18% steepness and that is hard for your legs and for „the whole engine“! They call the top of the mountain „the chin of the devil“ and it`s known for its extremly strong winds that make it hard sometimes to stay upstanding only.
After endless seeming climbs (ca.40km!) we reached that section, wich is actually just a region, (here it`s a so called „Quebrada“) and immediately the winds began to blow. My wife couldn`t go on pedalling, because the winds blew her off the street. As my bike is a heavier one I could manage to pedal, but man, what a struggle it was! I loved the situation: Surely difficult to cycle but at the same time unforgettable and fascinating!
We passed the devil`s chin and the downhill began (at least more or less, because the road was still going up and down). Finally we reached a road control we thought it was for cars and trucks only, but as the officers shouted at us as we passed we checked that they wanted to control us,too. A ridiculous passport control but at least they told us, that we were close to „Gualaca“. And from here we had to climb one last mountain.A nice lady with her pick up even offerd to take us, but surprisingly my wife said „No thank you“ although she was totally exhausted.Well, she also got her pride. For god`s sake soon afterwards began a 20km downhill that took us right into this little,friendly town.
Again only one option to sleep, the „Nueva Florida“, but it had the normal basic level, much better than the one in Punta Pena. The owner even took us with his car to a chinese restaurant, which diddn`t look much of a restaurant, but again served awesome tasting food. Seems to be always good food at the most weird places.