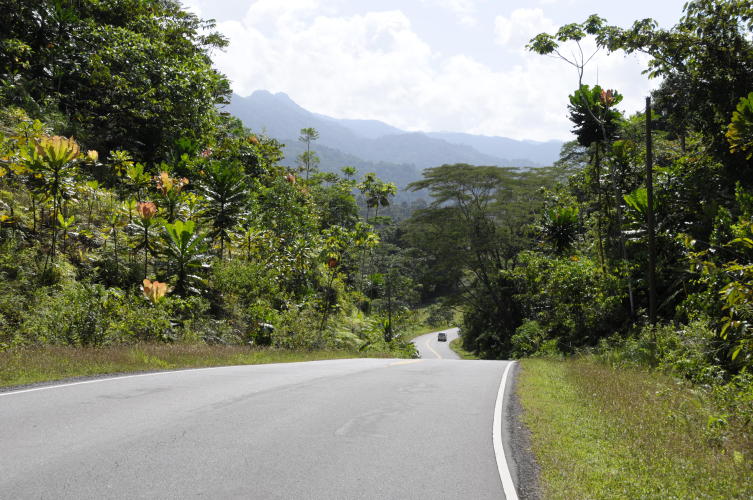 It wasn`t really hard to say good-bye to Almirante, and so we got back on the road very early heading for Punta Peña. The road continued like it ended yesterday, with constantly and often steep climbs. In between, we met two german girls also biking and they were going just the other direction towards Boca de Toros.

They told us, the climbs would continue like this until Punta Peña and we had the lovely information for them, that in their direction it would be just the same…One girl called „Swinde“ was cycling already for one year and had given up a police carreer for her dream to cycle the world.

We had a nice talk and really felt motivated to face that bloody hills lying before us!! The road led through jungle area and from time to time there were some very small and very poor indio villages apearing and as we had a little break, two indio children sat beside us and began to talk to us.

It was so good to hear from these children how ambitious their dreams for their future are. The girl wanted to become a doctor and they were both anxious to go to school and learn everything they`d be offered. You will hardly find a young folks in Europa telling you that. We really enjoyed listening to them and we hope that some of their dreams will come true.
As we arrived in Punta Peña, there was only one option to sleep called „Casa de la amistad“ just beside the road. The accomodation was more basic than basic can be, but anyway we had a bed and a roof over our heads. We shared the place with cucarachas, geckos and some parrots owned by the lady that rented the rooms.

She was a very nice person, complaining about politics and taxes in the usual way and she sent us to a funny restaurant where you felt like in prison, because all around there were iron bars like a big cage.
But: The food tasted awesome!!