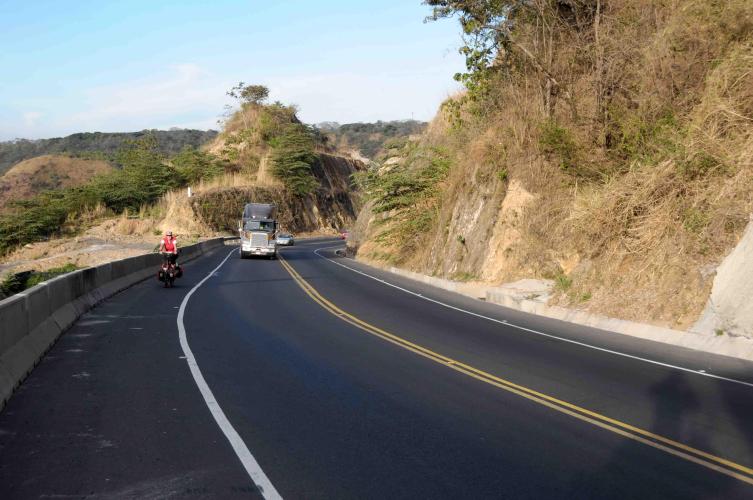 The last stretch biking. Our tour will end today in Alajuela, where we`re going to stay 5 more days, but won`t do any biking no more. As Alajuela lies 950m high and in Orotina we had just arrived at 250m altitude it was quite clear, that the road was going up.

We started at 6 o `clock in the morning and went on on the new highway. It was climbing up through the mountains. Although it`s a highway, it runs through beautiful landscapes and it`s supposed to be not as hard as the old road that runs straight through the mountains and still exists. After 24kms at the exit to „Atenas“ one must leave the highway anyway to follow the old road, because the highway is heading on for San Jose.

So we had a sufficient taste of what the old road to Alajuela is like. It`s steep, it`s heavy traffic, there are a million of these monster trucks, and there are no shoulders beside the road. For my wife this was a horror trip, because she gets really scared when the trucks pass you so damn close. And infact , sometimes it`s really dangerous and you just have to get out of the way because they feel like the king of the road and don`t show respect for nobody else. The last 10 km before Alajuela it`s getting better, because the trucks all go direction San Jose on the old road.

When we arrived in Alajuela, we stopped on the street to get some orientation where to find our hostal. A guy on a motorbike stopped also beside us and welcomed us in his country Costa Rica. He invited us to stay in his house for free, but as I had read just in the miday during our lunch break of a french couple that had been killed by some fake guides of the National Park „Manuel Antonio“ (where we had been before!) I thanked him a lot but really didn`t feel like following his invitation.

It was a little bit weird, all. We are staying now in the hostel „Mango Verde“, simple rooms, but a nice garden area and very friendly, helpful owners with their cool dog „Chelsea“.