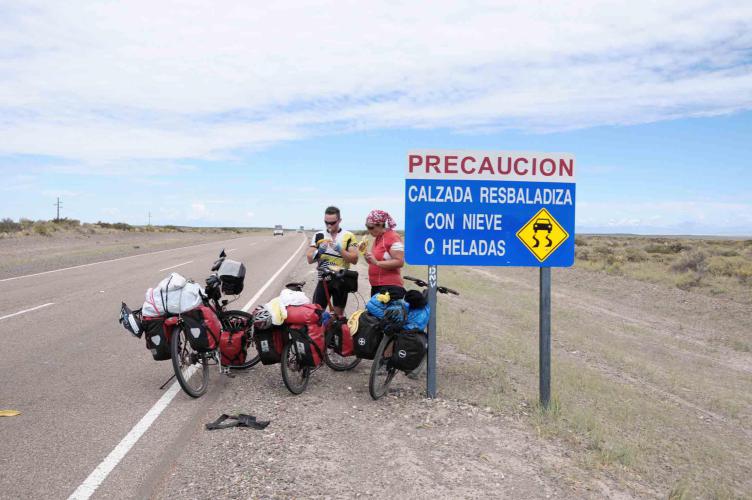 At 6.45am we were leaving already. Our plan was to stop in “El Sosneado” after 110km. The road was easy, all paved, but always slowly climbing up. After an hour I had to fix a flat tire on the roadside, which cost us a lot of time, but still it was early.

We saw lots of caterpillars sitting in wild rocket plants beside the road and also this seemed to be the tarantula region…
On the way we had some breakfast at a kiosk on the roadside and met an argentinian guy who also was riding a little tour with his bike. He had excellent knowledge of the area and was the owner of a little Finca nearby.

We exchanged experiences and had a nice, interesting breakfast chat. In the end we exchanged our emails to stay in contact.
At midday the wind was getting stronger and of course it was blowing contrary. As the road was still climbing and it was getting hot, we were quite happy when we reached the village of “El Sosneado” at about 4pm.

But contrary to the information that in “El Sosneado” there was plenty of accomodation there was just none. Not a single room. The only available Cabania was occupied, and besides this there was just no possibility to sleep. In the end, we got two offers: One was a huge tent in the backyard of a kiosk full of moskitos and without a floor, the other option was the local police station.
A Policeman offered unselfish his bureau for the night as he was in charge the whole night anyway. But as his bureau was a more ore less masoned barrack we decided to ride on further to the little town of “Malargüe” which was 50kms more to go.

In the beginning the wind was so strong that we could only pedal at a speed of ten/eleven, and like this we would arrive at “Malargüe” in the middle of the night. Suddenly a Landrover Defender with a german licence plate from Mannheim was passing us by. We were waving at it, and it stopped. A very friendly couple was on tour for 2 years from Canada to the south of Argentina, passing all of USA and Central America.

They seemed to be like a lucky charm for us, because afterwards the wind got softer and the road was going down. We rode the rest of the way to “Malargüe” at an average speed of 28kms and so we arrived quite early in “Malargüe”, much earlier than we had thought. It still was daylight.