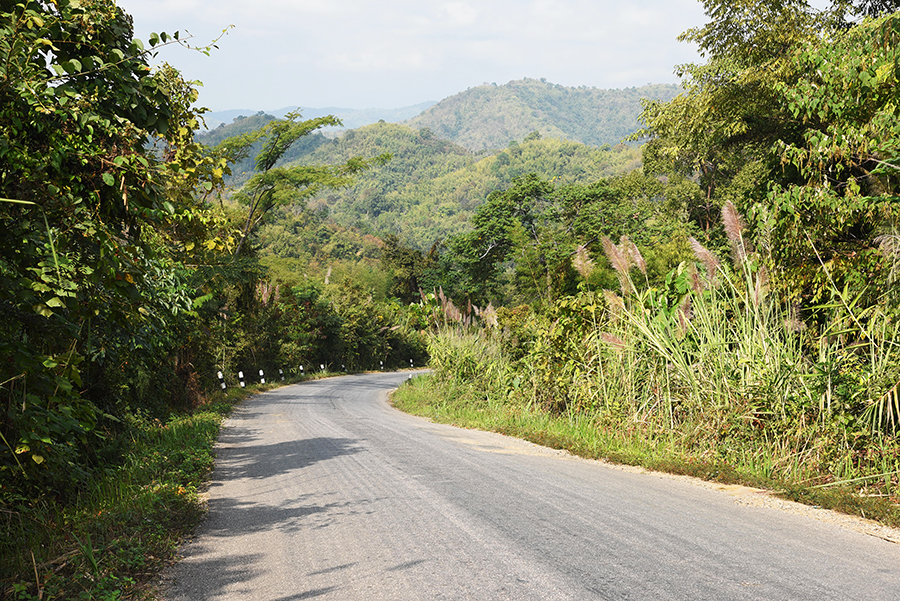 The night was really short. I couldn´t sleep because the people in the bar were really partying…. I don t know until when but they were really loud. At 6am I was already pedaling, no chance to sleep.

It was still dark and I had the chance to try out my new torch and it was really good! The beam was little bit narrow but strong. As usual the road was going up and down but nothing special.

Before 8am I got to Paklay and I bought some bananas. I kept on going and passed the new bridge sponsored by Holland. This part of the road  was flat and the landscape was rural. Rice fields- typical Asian. I thought ok, flat today. Not bad. But I was wrong. The flat stretch lasted maybe for about 8km and afterwards the climbs started.

In the beginning it still was ok but not for long time. It got steeper and steeper, real tough. The steepest climb was 21% and this is f… sick. I needed to push my bike. You even could not climb in zig zag because the road was busy and there were huge potholes. I needed to go very careful because the pick up, they also try to avoid the potholes and they don´t give a f… for a bike in their way.

Today I made a mistake. I didn´t buy any water and I didn’t look at my map in time. When I did there was no other option possible than to ride through the very jungle for the next 30kms.

Climbing one hill I was really going very slow. I wasn’t motivated any more. Suddenly a guy on a motorbike approached to me and stopped. He asked me if everything was OK with me – a guy from Holland. His name was Albert. We chatted a little bit and he offered me his number- just in case. I told him the only bad thing I suffered of was the fact that I didn’t have left any water.

So we looked his map and saw that the next village was about 18km away. OK, I told him well, that’s life, I need to keep on pedaling. Not nice, but I won’t die. I will make it. He left and I kept on struggling with this crazy, steep hills. Going downhill I really needed to use my brakes constantly because of the potholes. My rims were so hot!

Sun was shining and the temperature went up to 35°C. I listened to some music to push myself and when I was riding down one hill Albert suddenly appeared again with a bag with 5 bottles of water and a cold coffee. Amazing!!!

He told me wanted to give the bag to some cars to take it but nobody wanted to take it so he himself drove back again. Thank you so much buddy!!! That really kind of saved me, afterwards that I pedaled on with a lot of motivation again. I climbed up faster and I even could enjoy a little downhill.

When I arrived in the village I had a break and I drank two more 2 Red Bulls and above some sugar juices. I only had to go 20kms more and the rest was not so bad and there were even some flat parts in between. I ascended today 1316m .
I arrived to a village at 4pm and looked for a room.

I checked in in „Sone Savan Guesthouse“, I showered and I went to look for something to eat. Everything seemed to be already closing and at one place where I asked for food they told me „only soup“ but I wanted some real food. I can’t see this soup anymore. I walked around and found the market but it was also about to close. Finally I bought a baguette just in case and on my way back I found a small place where they served fried rice. When I ordered the second time repeat the lady just couldn´t believe it.

I decided to stay here for tomorrow to recover and do some laundry. It’s really necessary to wash my uniform. From here I could easily just cross the border to Thailand but I think I am going to Vientiane and stay some more time here in Laos.