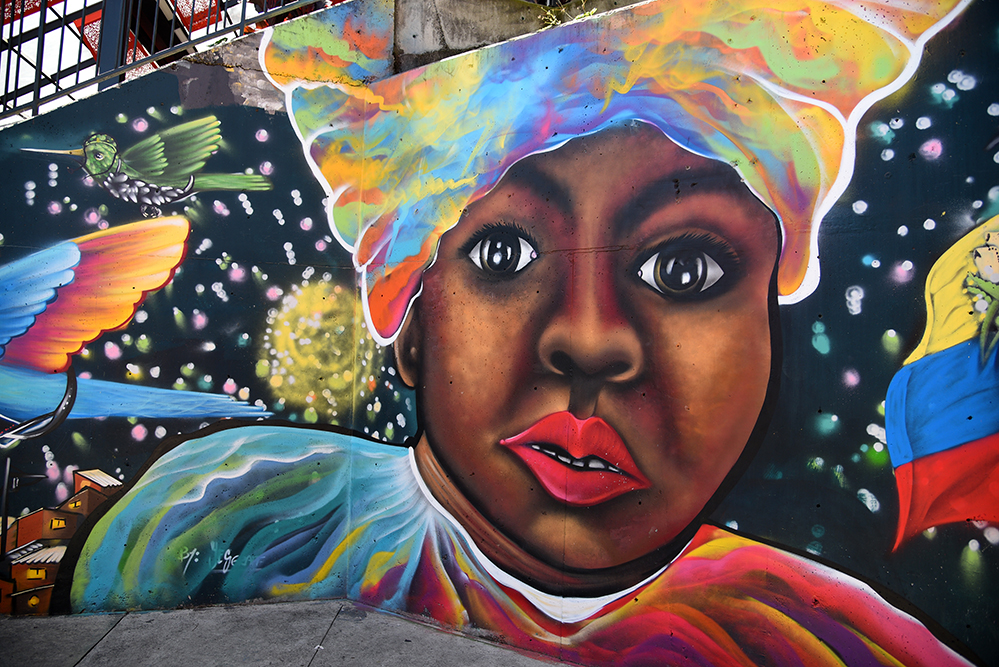 Today the breakfast was much better than yesterday. Maybe yesterday I went down too late and the best things were finished already. Could be.

My plan was to do the guided sight seeing  tour. I wanted to avoid walking around and wasting time with looking how to get to each sight. In the hotel they offered tours but they were all booked so in the end I went to Comuna 13 on my own and got me a guide there.

Comuna 13, also known as San Javier, has the most tumultuous history of the city. Once even labeled as the most dangerous community due to its astronomical homicide rates and its forced displacement of thousands of residents.

Comuna 13 Medellin is an over-populated and low socio-economic zone that crawls up along the west hills of the city with thousands of brick and cement homes stacked close one to another. It was a pivotal center for paramilitary, guerrilla- and gang activity. The location offers ideal conditions for crime, as it leads directly to the main highway (San Juan Highway), providing easy transportation of guns, drugs, and money.

Today it’s a an absolute tourist attraction. The young ones do a lot of graffity art here, you can see breakdance performers on the street and all kind of things that belong to a so called subcultural area. A must see if you  visit Medellin. You don’t need a guide if you don’t want to. Only if you are interested in the meanings of the graffities it makes sense. I found it interesting, you can learn something and you help the people to make a living, too. It’s not easy here….

From Comuna 13 I took a taxi to Plaza Botero then.

Plaza Botero or Plaza de Las Esculturas (Sculpture Plaza) is 80.729 square feet of public space that occupies the area in front of the Museum of Antioquia and also surrounds the Uribe Palace of Culture .

In this space exists a perfect mix of art, culture and nature in which 23 of Botero’s bronze sculptures are on permanent display and exhibit. Donated by Medellin’s own Fernando Botero years ago and put into place during 2002, they adorn the surrounding area and create an amazing outdoor exhibit. Among the pieces worth admiring are “The Hand”, “Eve”, “Maternity”, “Man on horseback”, and “Roman Soldier” to name a few.

Visitors of this part of the city need to be alert.  Like in all the big cities there are many junkies, pick-a-pockets and it is very crowded.

I left and went to eat in a Vegetarian vegan restaurant . It was nice because I could enjoy some vegetables that I had missed long time now and I ate some salad.

After I just strolled along a little bit and  about 4pm I decided to go back to the hotel.

In the eveneing I went to eat at an Italian restaurant. I ordered some spagetthis to get carbohydrates for tomorrow.

I want to go to Santa Rosa de Osos tomorrow. It will be a tough ride because I have to climb up to 2600m ….Well, we’ll see.