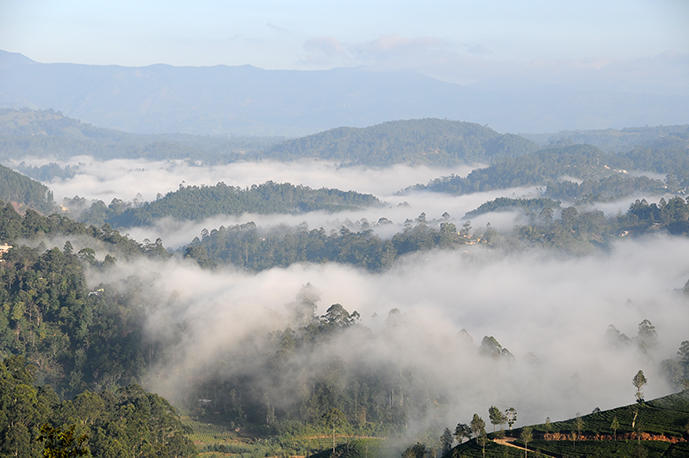 Today we are setting off for the highest town in Sri Lanka: 1880m above sea level. It was a cold morning in Haputale. Cold winds that swept the mist of the mountains over the small road we took. It seemed to be like an unreal scene of a film, a very special mood,a very rough beauty.

The road was going up and down through beautiful sceneries and little villages. Meanwhile the sun came out and it was at this height it was of enormous power. The air was still cold but the sun seemed to burn our faces.
Already the climbs were steep and also were the following downhills. When we reached the main road, the A5, the final 20km climb up to Nuwara Eliya began.

An exhausting ride, very steep and no more “downhill breaks”. The road just went up, up, up. Finally we arrived, after 1300m altitude difference we had cycled. The guesthouse owner “Allen” came to pick us up in the city center and proudly announced, that his guesthouse (called “Chez Allen”) was the highest bilding in all Sri Lanka, which ment, again we had to climb up to reach the place. My wife wasn´t willing to climb up only one single meter.

She suffered a bad cold, and after the tour today she felt just like smashed. So she put her bike in the car of Allen and went up to the guesthouse by “Taxi Allen”. Allen has a nice guesthouse and his wife cooks heavenly. We really enjoyed our dinner today!!