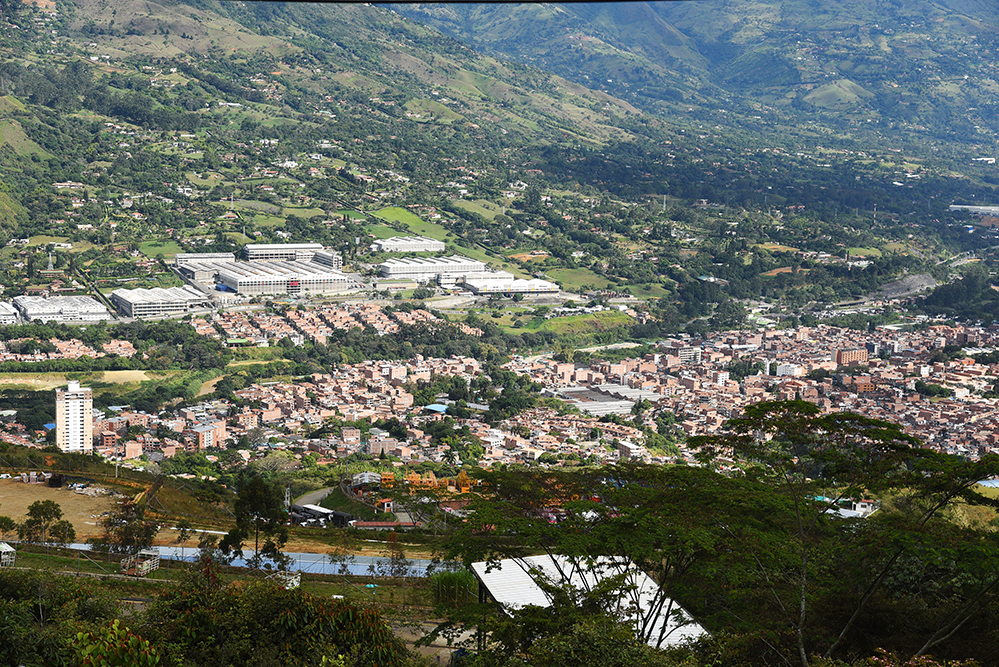 Today I got up at 6 o clock. The night was not very good. It was hard to find some sleep. These hotel walls are cheap paper walls and a couple next door was going at it all night long. In another room there was really loud music with laughter and the usual party sounds. It was like the choice between discovery channel and MTV…..

At 7am I was already pedaling getting out of El Santuario.

Temperature was a little bit chilly-15°C. The road like usual was going up and down and I  already guessed that because I saw a lot of guys on their racing bikes.

l thought about stopping to have breakfast but in the end I was going so fast that I  decided to eat some cookies and some chocolats on the road.

The highway was filling with more and more  traffic. I arrived at the top of the hill at 2284m and from there it was a nice downhill all the way to Medellin which lies at 1495m.

I was in Medellin at 10:45am already. Really fast.

My wife had checked out some hotel options for me because yesterday’s internet was a desaster and she texted it to me.

I started to check them out but some of them were booked already and finally I found one called “El Porton de San Joaquin” but the biggest room wasn’t ready yet. So I needed to wait until 3pm. Whatever,  this time I was determined to get myself a real spacey and comfortable  room.

I had to wait anyway and so I looked around meanwhile to see if there maybe was another good hotel. I checked out some others but many had big stairs and I didn’t feel like carrying everything up. In the end I came back and lucky me they had just finished the room and it was waiting for me to move in.

This is the best Hotel so far. A big room, A/C, a small fridge and hot water. Nice.

I did the check in, took a shower and I ordered some sandwich. Heavenly. With stomach full I took a nap and then went to a supermarket.

Later on I did the blog. Here the internet is ok. What else do I need?

I decided to take 2 days off from biking. Enough time to have a good look around.

I watched some TV and I went to sleep late.