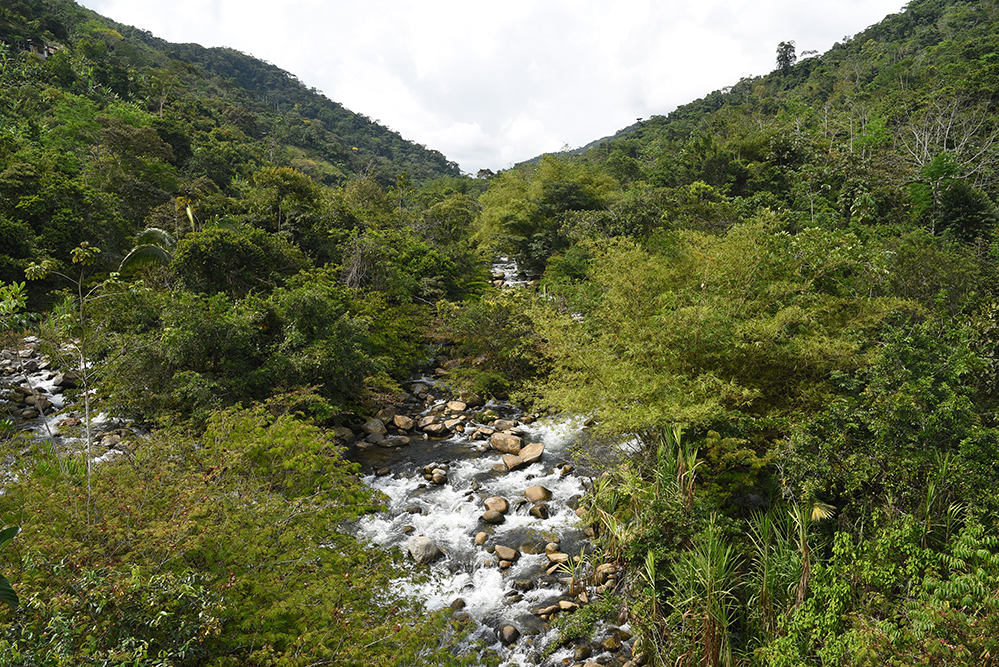 I knew a lot of climbs were waiting for me today so I had set the alarm clock very early: 4.30am it was ringing.

I thought it would be better to start very early and so at 5:30  I was  already pedaling……Immediately the road started to climb-constantly going up and down, up and down. Exactly as I had expected it.

When I was climbing one of those uncountable hills suddenly some raindrops began to fall. Well, it’s hard to imagine but in just a few seconds rain came down like someone had opened all the gates of heaven at once! It was raining cats and dogs and I was lucky to find this tiny carpenter shop where I could take some shelter from the heavy rain.

Another guy with a motorbike also found rescue beneath the roof here. His name was Alfonso. We chatted a little bit and I enjoyed our conversation. He told me a lot about the times when there was so much violence here due to the cartel and the guerillas. It was  interesting.

I stayed there for about one hour until the rain got less.Then I decided to keep going.

The climbs sometimes were real hard but the beautiful landscapes were compensating my suffering.

There were stretches where I was climbing up to 1500m altitude and then again went downhill  to find myself at a hight of just 500m. Nice of course, but it’s hard to enjoy it 100% if you already know you need to climb up all the way again.

At 2 pm I stopped at a restaurant to eat and drink something. While I was sitting  there some people came up to me to talk and to ask the usual questions like „where are you from ,where are you going, does your bike have an engine“ and so on. It’s always nice to talk a little bit and I told them about my stay in Doradal. Their eyes got wide open when I told them about the price I had paid for my room there. Hmm, so I found out this way that I had been ripped off back there at this hotel….It is nothing that bothers me but for sure I will give them a nice review online later on.

I went on and the road kept on climbing until I finally reached my today’s destination and I started to look for a place to sleep. It was already 4pm and already climbed more than 1700m and I felt really tired.

I found a truck stop. Very simple, but with a restaurant – yes! I took a shower and I went to eat.  Menu like usual: chicken, rice and beans.

When I then went back to my room and put the key the door wouldn’t open. „What the hell is that“ I thought  (Not necessary to mention that I use the well known spanish expression in reality…) Shit! I went back and I complained while I was showing the damned  key to the guy there…..He looked first at the key and then with this question mark-face at me. „This is not our key senior“. What? I first didn’t understand but then when I checked the other pocket of my pants I found a second key there – the one for my room  Oh! I really had tried to open the door with the wrong key! This one I still carried it with me  from the last hotel room in Doradal… ….I admit it made me smile….

Ok, but the most important thing for me was I could get inside now. I was so tired that at 8pm I went to sleep