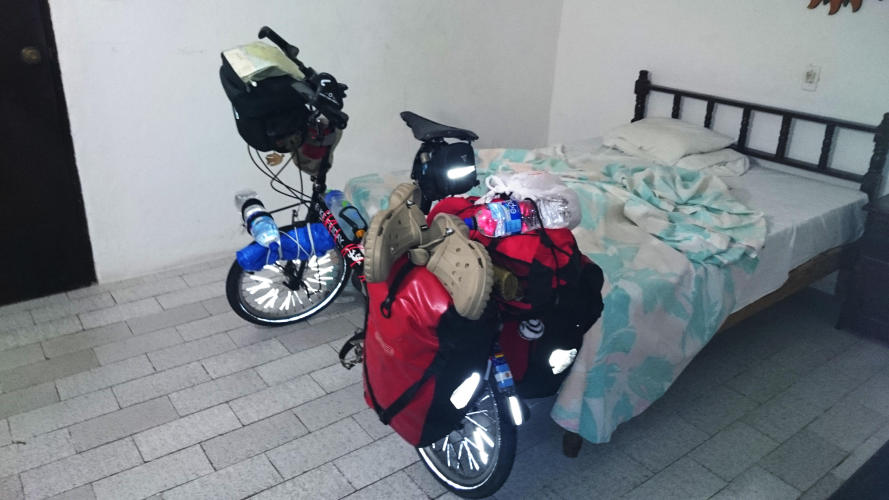 The night was very short – I woke up at 3:30 for the fan in my room was so loud. It took me some time to fall asleep again, but at 6 o´clock I definitely was awake. I packed the last things and at 7 o´clock I was on the road.

It took me like one hour to get out of the city. I took the”carretera libre” N°180. The street was a little bit busy but most cars passed me by quite respectfully with enough space between us. It was hot but what really was bothering was the humidity – about 90%.

While passing a small village on the roadsideI 3 big dogs were chasing me, trying to catch up with the bike. I really was happy to have my pepper-spray with me!

After about 60km I left road N° 180 and turned right onto a small road leading to the small city of Kantunilkin. Although the „tripadvisor“ page said there was only one reasonable hostel there at the entrance of town there are about 5 posadas. I took one located quite in the center: „Posada del Angel“. Basic but clean. I had a shower and started to figure out how I could manage to put some of my stuff in the front of the bike.

As I have a ultralight bag with me I put some things in there from which I thought I wouldn´t need it very soon. For the first time I´m travelling with only 2 panniers, all of my former trips I did with 4. I considered it more easy to have only the two panniers one the back, but to be honest, I really don´t like it too much to have all the weight on the rear rack. Next time, I will take 4 panniers again – I already decided that.

I washed some civil clothes and went to eat. I found a nice place where I had 5 chicken tacos – delicious! This night I´m gonna sleep well…