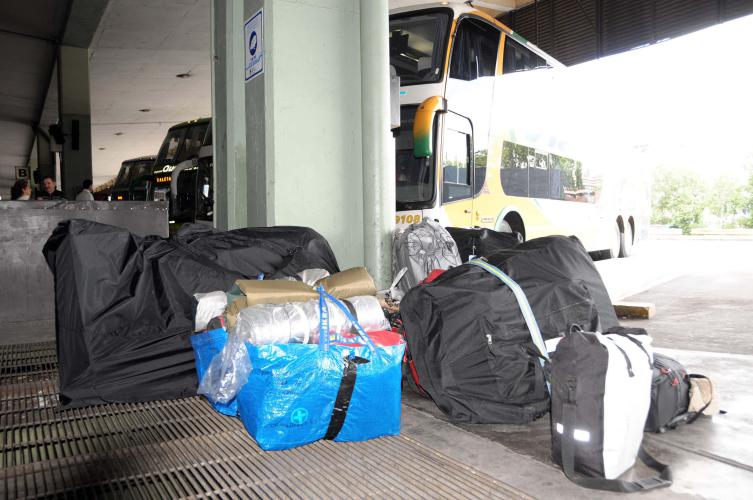 The bus terminal of BsAs is quiet for it´s new year´s day and most of the people stay at home curing the hangover of the previous night….The bus company “General Urquiza”is the only one that does the long stretch to to the small town of “Chilecito”, and they seem to be very aware of this fact.

They told us that they would only take the bikes if there should be enough space left after loading the bus with all the other luggage of the people. We had to wait….There seemed to be enough space left to take the bikes, but suddenly there existed another amount of people who were supposed to join the journey during the ride. Well, in the end they were willing to take two bikes, but there was no way (not even with extra fee!!) to convince them to take the other ones.

So we had to leave them behind, praying that their promised service to send them one day later with the next bus would come true. (Maybe someone knows how Argentinians handle their promises-everything is a possibility but nothing is an obligation and time is a relative thing).

The journey was more or less, as they had no service on board wich is usual, normally you get something to eat and drink, but this time-zero. So I cannot recommend the bus company.After 18 hours we arrived at the terminal of Chilecito, we packed the bikes and looked for a hostel. We found a nice one called “Hostel del Paiman”