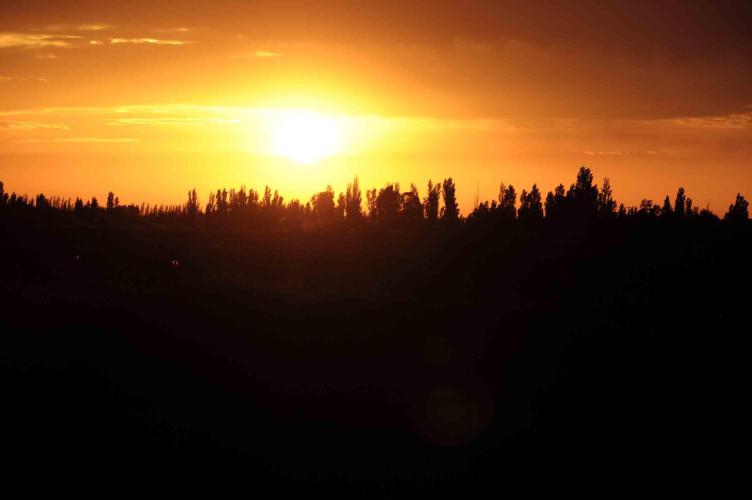 We left very early in the morning to enjoy the fresh air of the new day. It was raining during the night and the sky was quite cloudy, very unusual. The road was nothing spectacular, with more traffic then before and without difficulties we headed towards Mendoza. The surrounding with lots of vineyards, trees and green fields. Fertile ground here.

Entering the town of Mendoza a car was begging us to stop. The man getting out of it introduced himself as the director of the police here for the district of Mendoza. He was telling us we´d be crazy passing the the town entrance with our loaded bikes, because he considered it as far to dangerous. “The risk of being assaulted or robbed is far too high” he said, “I won´t let you ride on without an police car, that accompanies you”.

Wow! An police escort for us only! First time we´d be treated like famous stars entering a town. It seemed weird in the beginning, but anyway it was cool, for we didn´t know if the police director, Mr. Lic. Nestor Ramon Falcon, just wanted to show off a little bit, or if there could accure a real dangerous situation passing through these streets.

Well in the end a second police car joined the caravan, and people surely asked themselves who the hell we could be ?! We arrived at the hostel, took some photos of our “helpers” and waved them good-bye.
The hostel “Punto Urbano” is a good place to stay, but there is no air condition, only vans. As temperature was still extremely high, it was hot,hot,hot, and we could hardly sleep.