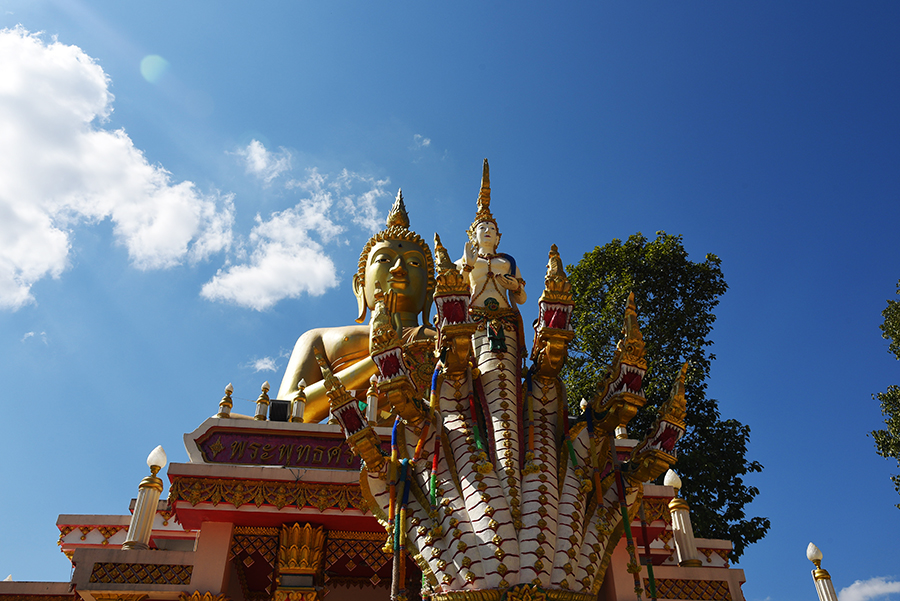 Today the routine started again. I got up at 6 preparing everything and then I waited for Hernan. He was ready at 7:15 and we started to pedal. We looked for the road to the Friend Bridge and it was very easy to find it.

We were about 20 km away from the Bridge. We did the Laos exit without any problems. The exit fee we had to pay was about 1,5 USD but you get a receipt. We pedaled upon the bridge – bicycles are allowed here while some of the other bridges you can only cross by car.

We entered Thailand by crossing the Mekong and when I did the entry card the only thing they asked from me was how long I wanted to stay in Thailand – nothing else. Hernan hadn’t put a Thai address in the entry form and so they sent him away to fill it in. He put in “Bangkok” but the police guy sent him back again. So I told him to put in the address of my guesthouse and after some minutes we could set our feet on the ground of the Thai kingdom.

The road was flat with heavy traffic just like some of the highways with 4 lines.
20kms before reaching our destination we had a break. We had chicken rice and some fried eggs for lunch. The chicken was very good but the eggs were not while Hernan had his first opportunity to meet a lady boy….

After one hour we continued. We arrived in the early afternoon, it was about 3pm. First we had some coke at 7/11 and I called the guy from warmshower where Hernan wanted to stay. Bad news! The guy said he would not be able to host him because he thought that he was coming yesterday and so on with the pretextes bla bla bla.

So we started to look for a guesthouse or a hostel where he could stay but they all were so expensive that in the end we decided to share a room in a hotel. That was cheaper than a hostel.

We showered and went to a mall. I wanted to change money and Hernan was looking for a sim card. We strolled along in the city and by accident walked into a street with a lot of bars and a  lot of old men looking for young girls…..

Finally we found an original Thai restaurant. When we ordered some salad I emphasised not to make it spicy but it was hot like hell.
Back in our hotel I went to sleep at 10pm.