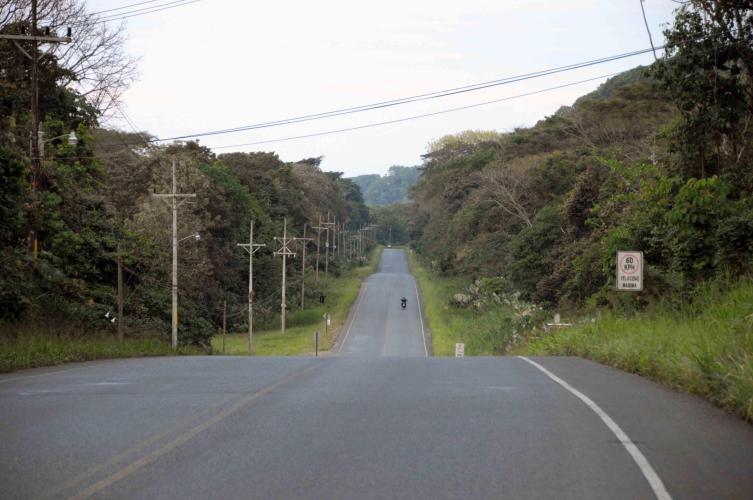 At 6am we were on our way to have some time riding without the hot sun. The road was nice, some stretches went right along the seaside and there was only little traffic. We had some impression of „Road wildlife“ in Costa Rica, that can be very tragic sometimes….

When we arrived in Quepos we had some 5 kms more to go to get to Manuel Antonio, a village that is named like the National Parque thats`s close to it. Here we had booked in advance at the „Casa buena vista“, for it was the weekend, and we wanted to be sure to have a nice place to stay.

When we asked for the way to get there some misgives occured to me as the guy I was asking started to laugh loudly when he heard that we wanted to go there by bike. I should be right: 5kms of absolutely steep climbs were lying before us an the temperature was rising up to 41°C. O.K., here we go. My wife started to push the bike after the first steep curve that was about 17% climbing. Even pushing the loaded bike was hard to handle so steep was the road.

I managed to go up by bike, but man, I had to do a hundred breaks and I felt like vomiting. This really was a tough hill – I understood exactly, why the guy laughed out loud! Finally we reached the top, and asked for the location as there were no signs. At first nobody knew the place, so my wife called and asked the owner (A californian Lady) where to go. For God`s sake we were on the right way! When we arrived, the house was right in the jungle a real oasis.

It was worth climbing up at least. The rooms have wonderful terasses where you can watch monkeys, birds all kinds of butterflies, just all the wildlife you can see in the closeby National Park. An amazing place!