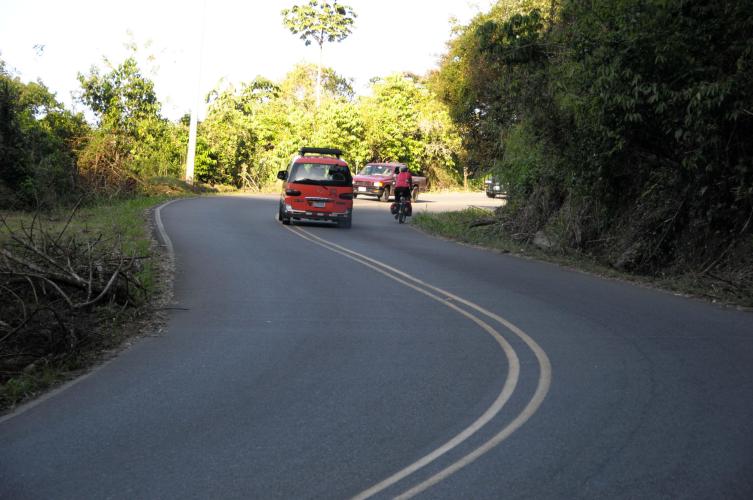 It began all so nice: Leaving Turrialba early in the morning the road was going down for at least 5 km we hardly had to pedal at all! But the end of the downhill turned out to be a tough climb of almost 50km until the junction of the main road leading to Puerto Limon. Again altogether 1000m upwards in the end.
The road through the mountains was scenery, a lot of green valleys, mountains with cows on it, clouds and the blue,blue sky above. The romantic ride had an end when the highway to Puerto Limon began.

Heavy traffic with really huge trucks that pass you by without taking care of the bicyclist next to them. Eiher you go out of their way or they gona just roll over you, and these highways don’t have shoulders ! Very dangerous ride,we were glad to arrive at the small road leading to Moin, a small village some km before Puerto Limon.

Here we stopped at the Cabanias of Walta situated on the beach and very basic.In the small restaurant that belonged to the cabanias we got something to eat, the local dish that’s called Gallo Pinto, black beans with rice.Tomorow we try to get a trip to Tortuguera, a national park.

Moin is the starting point for these tours, but the locals told us already we’ll not gonna make it it one day, because the boats don’t go there and back at the same day, without sleeping there it seems to be impossible…. Well, let’s see tomorrow.