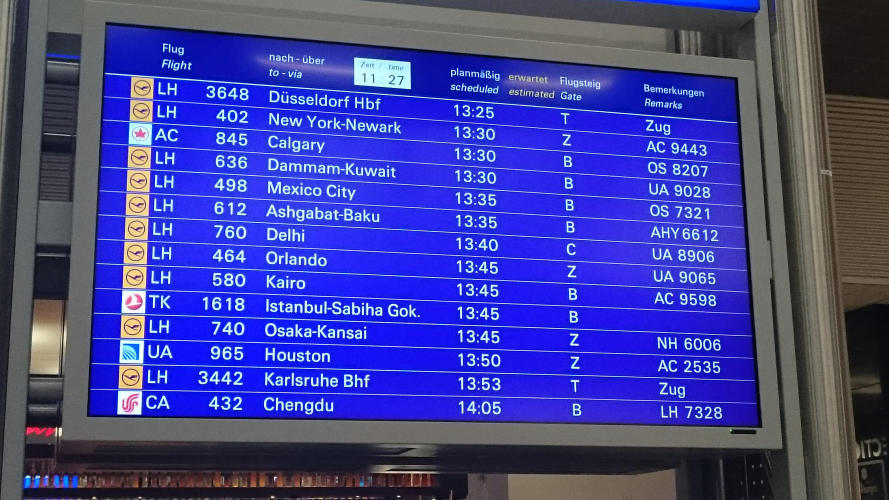 I woke up today early at 7 o´clock in the morning. I hoped to feel better today, because I already know how bad it feels to fly with a bad cold but unfortunately this bad bronchitis I´m fighting now for almost a week with decided to stay with me. Anyway – with a lot of pills and drugs inside I got in the van of a friend who picked me up at 9am. One hour later we arrived at Frankfurt airport. I checked in my stuff including the bike without a problem.

By the way: my airline Lufthansa takes 100€ for the bike each stretch.A last coffee together with my wife and at 12 I was on my way to the boarding gate. The scheduled time for the take off was 13:30 and we started 30min late. The flight was very good and I was lucky: I got one of these irritating, dry coughing attacks I´m used to since one week only once.

When we had landed at Mexico city about 19:30 p.m. ,my brother was there to welcome me and to see me for a short while as my onward flight to Cancun was leaving only 4 hours later. I had to check out all of my luggage pass the migration area and had to do the complete check in again for my connection to Cancun. This flight I had booked online already back home in Germany with a cheap company called Volaris.

I was so happy my brother was there to help me (thank you so much Ale!!) because you are not allowed to take a trolley outside there, and he could help me with the bike box, which made things a lot easier. The next problem occur at the check in. The lady at the counter wanted to pack my panniers again. They were packed together like always inside a big IKEA bag, tied together safely. I really had to argue a lot with her until I finally asked her to call for the supervisor. Well, discussions went on with him, but in the end he let me send the panniers like I had packed them. That really was annoying, and for god´s sake I´m a native speaker (I´m born in Argentina.)

After my brother had left I went on to the boarding gate. I felt very bad – tired and really fucked up. When I wanted to board and showed my boarding pass to the the stewardess she said: „Sir, you got the wrong airline! We are flying to Cancun, but we are not Volaris airline that you are booked on. Look at your flight number.“ Well, I did and f….shit, it was a totally different number. I rapidly checked the screen and began to run to the right gate which was located just at the opposite end of the airport. I felt like getting a heart attack but I managed to get that damned flight- I was so happy!!!!

The flight itself was o.k., it took us only 1hour 30min to arrive in Cancun. I took my bike and my luggage but had to carry it all as there are no trollies there. Man that really sucks. At least the airport is small.
I went outside and got a colectivo taxi to the place where I had reserved a room via internet about 6 weeks ago back in Germany . Meanwhile it was 2am in the morning which means about 25 hours without sleep. When I arrived at the hostel another big surprise!!! They had reserved the room for the next night, and told me that for this night there was no room left.

Now I was freaking! I wanted to talk to the owner who turned out to be a young lady. She said they were confused with the dates and thought the 24th 2p.m. would mean the next day and so on. Well, after some discussions suddenly there was a room for me. It wasn´t exactly nice, and the smell was not exactly perfume, but I didn´t care. It was only for this one night and I just needed a bed. I was so exhausted, just wiped out. Finally I went to sleep about 3am local time.