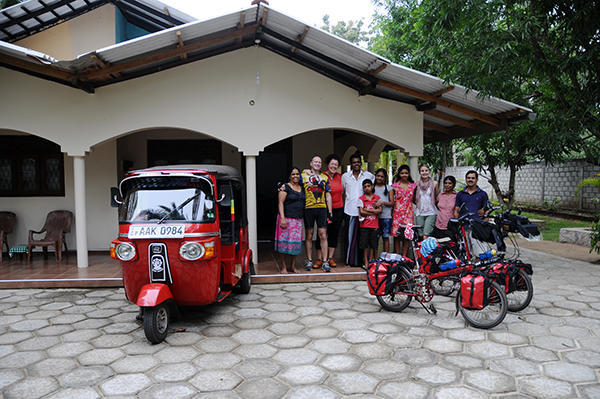 Hard to say good-bye to our host family of Mr. Milton in Sigirya! They gave us so much more but a roof over our heads: we enjoyed their kindness, their relaxed attitude, their help in any situation, their laughter and their ability to bring Sri Lanka straight into our hearts. Thank you so much!!!

The road was really nice to pedal: small, with almost no traffic and right through the jungle. We saw the usual “beware of elephants” signs, the “go slowly-jungle area” signs, or the “beware of monitor lizards” signs. Never we paid too much attention to the signs, as during the day you would rather consider yourself as lucky seeing one of them from far…

We went slowly towards some cars stopping on the side of the road to see what was going on there, and then it was quite clear why they all had stopped: a huge elephant just on the roadside eating some fresh gras. Oh, that really was exciting and so nice! As we watched while rolling slowly a bus came and this idiot was blowing his horn loud and constantly to make sure he could pass through the stopping cars.

The elephant was not amused about the disturbing noise and suddenly he began to move. All the cars went on immediately and so did we, but the elephant was annoyed and started to run after us, doing this trumpet noise they can do with their voice. Maybe it´s important to mention that they can run at the speed of 40km/h….. That was really scary, and my wife seemed liked paralyzed for fear, she was so shocked. I shouted and yelled at her to pedal for her life and thanks god my yelling reached her and she did.

The elephant ran after us for another 100m, but then turned around and we were safe. We pedaled on for some more meters until the elephant was out of sight and then had a break to calm down. We were lucky in a double sense: to see one so close, and to escape from his charge.
The rest was easy, we arrived without any interruption at Polonnaruwa, and the “Samagi Guest House” was a nice place to stay with the usual delicious food.