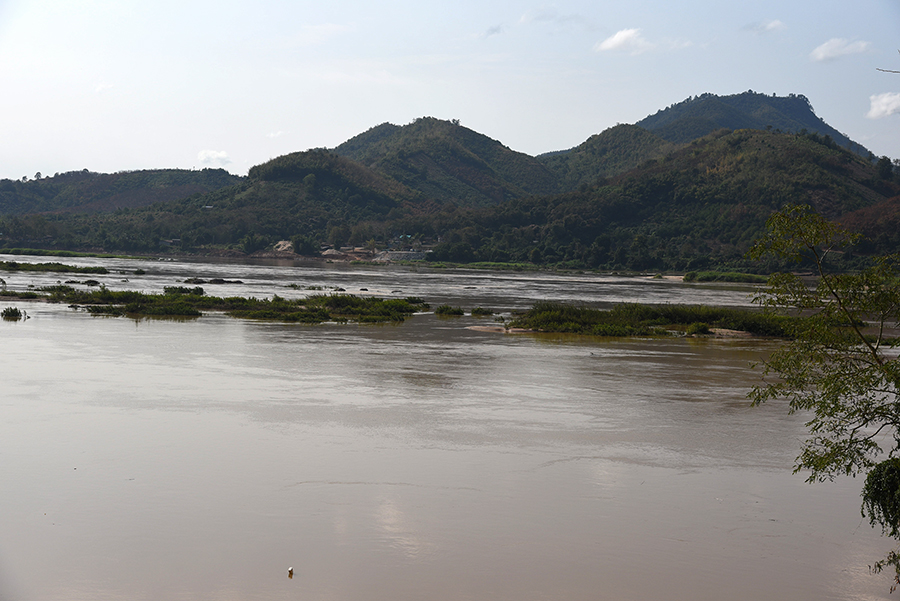 At 6:40 I was already on the road. The weather was perfect, kind of chilly 22°C. Right after I got out of town the road was going along the Mekong.

It was a dirty road and I was lucky that it didn’t rain for a long time. If not it could have easily been the same like the last one I made with Hernan. There were some hills and on the first 15km there was no traffic at all. Very nice.

Later on unfortunately the road got really worse with a lot of potholes. Now there was some traffic that  swirled up a lot of dust. As there was also a lot of crushed rock on the ground I was riding very slow, about 12km/h, but the heavy loaded trucks even went slower than me, maybe  10km/h. The road was too bad.

During pedaling I realized that to Vientiane there were 145km to go. I originally thought it would be 50 km less to go, so I decided to stop before. I was getting onwards too slowly.I really enjoyed riding along the Mekong River. It was nice to watch how the river always changed. Its current can be very strong sometimes.

While I was having a break I checked my spokes and I had to tighten some of them. Also the attachment of my bag at the handle bar was a little bit loose. I tried to tighten it but bad luck! It broke! I had to put some cable strap and thanks god it looked it was working.

The bad road went on for 40km. After it was paved and nice but still I didn’t want to go to Vientiane. I would arrive there late in the evening and I didn’t like the idea to look for a guesthouse all tired and in the dark.

I decided to stop in the village of Sakay. There’s a decent guesthouse and next door there’s a restaurant. Perfect.I looked for my power torch but couldn’t find it. I must have lost it on the way, but where? I really got no idea. I was lucky, I could find another one to buy here in my guesthouse. Big and cheap. In Euro: 2,80€

I took a shower and I went to eat next door. I ordered rice with vegetables. After I did the journal and at 8pm I already went to bed.