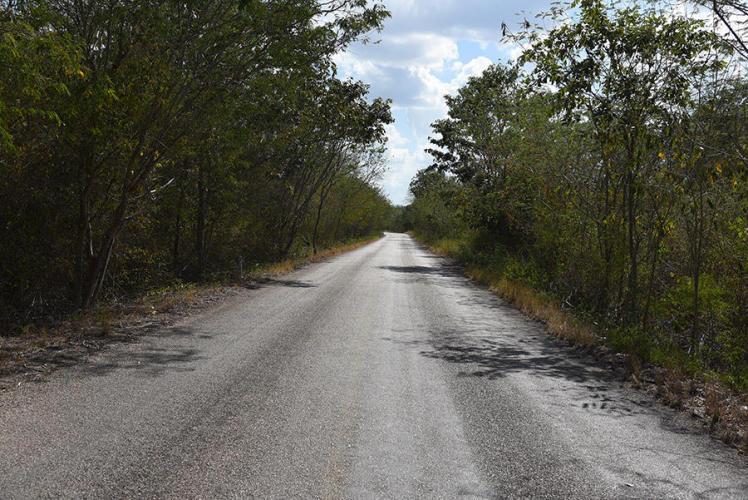 We wanted to start at 6am but as usual we we were late a little bit. At least we started only 30min later at 6.30am.
The first stretch was going along the huge highway towards “Merida”. The unromantic part of the day but not too bad to cycle. Wide shoulders made riding quite secure although officially bikes aren´t allowed here. We were passed by some folks on racing bikes several times who did their daily morning workout and we were fast, too.
So we arrived in “Merida” without problems, but when we headed for the center (we had to go right through the city from the north to the south) I suddenly felt that something was not okay with my bike. I stopped and I saw a broken spoke that bothered the chain. Well, it could have been worse – in a big town like “Merida” I surely would find a bike shop…..
It took some time and we cuold find one in the end but we lost about one hour until the guys got it fixed. A very nice experience although bad luck – they didn´t even wanted to be paid for they used the spare spoke I had with me.
After passing “Merida” we went on on very small roads that led through tiny villages where we sometimes felt like after the time warp. You automatically feel eased that you are not born here.
People have a hard life here. Riding was a pleasure. No traffic, nice scenery right through the outback. At a junction we took a wrong turn and cycled some km until in a small village the way just ended and there was just bush. We asked the people and they confirmed what we were already guessing: Wrong direction. No possibility but going back the whole way to the junction. Another hour lost.
Now we were rather late, because we still had some km to cycle.
Maybe we would have to cycle in the dark for some time because here in Yucatan it gets dark at 6pm. My wife was very happy… (She wanted to take the right turn when we discussed where to go at the junction)
The road kept on going through dense bush and tiny villages. At 5.30pm we reached the small town of “Ticul” which is about 20km from our destination “Oxkutzcab” which is Maya language and means “Land of the oranges”.
We decided to ride on even if this meant we had to ride for some km in the dark. So the last 5km we put our lights out and reached “Oxkutzcab” in the darkness. But the road was no longer a small narrow path from here but a big good paved road, so it wasn´t too bad.

We got a nice room in the “Puuc hotel” and went to eat. This was a tough ride today and our supplies had consisted of bananas only. Hunger!!!