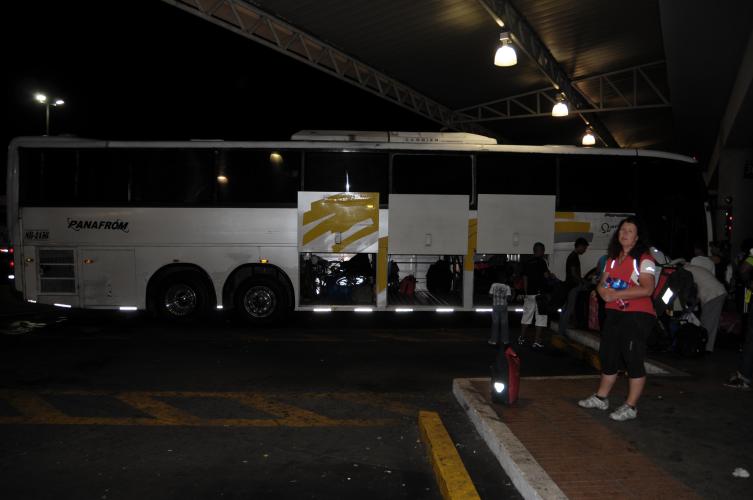 Organizing the bus transfer to Paso Canoa (the border to Costa Rica) took us half day, the patient soul of Panama again showed its whole dimension. After breakfast we took a taxi to the bus station as you can buy your ticket only at the same day you want to travel.

A long queue was already there waiting in front of the counter. Most of the people wanted to take the bus at 11.30am and still had to buy the ticket at 11.40am already….After estimated 1 hour it was our turn. Unfortunately the lady behind the desk didn`t know about the rates for the bicycles or if we could take the bikes at all. So she had to make several calls and afterwards she was sure we could take them, but still didn`t know the price.

So we returned to the hotel, packed the bikes a little bit and relaxed. We hoped the hotel guys would help us to get a taxi big enough to take us with the bikes, but they were helpless as a new born baby. Finally they adviced us to get on the street with all our stuff and to wait for a pick up to pass by. A really powerful advice man. But we were lucky, as we sat in the lobby at 7pm, there came a man to pick up some other guests to take them to the airport. And: He drove a big 4 wheel drive.I asked him if he could take us later to the bus station, too, and he agreed.

So this problem was solved, because our bus was leaving at 22.40pm and we didn`t want to ride to the bus station at night, passing all the “no-go” areas for tourists by bike in the dark.

As we arrived at the bus station and we walked in the so called waiting room, immediately the “assistent” of the bus driver came towards us to inspect the bikes and to bargain the price with us. All very friendly and no problem at all.
For 20 USD he loaded the bikes. We wondered how the bus would gonna be like and kept waiting.