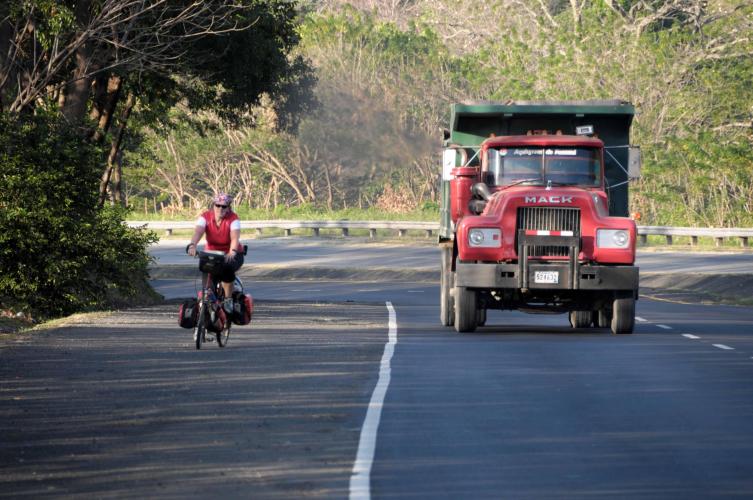 The great adventure Panama City was waiting for us today. We already heard and read from other cyclists, that entering the city by bike is not without dangers but an absolutely unforgettable thing.

We wanted to start at 6am, but the girl in the hotel was still sleeping (she should have been awake then…) so we had to organize someone who could open the gate for us, and organizing things in Panama always needs its time. What you can learn here like nowhere else is patience. People who know me also know that this is not exactly one of my strongest attributes.

O.k. then, at 6.30am at least we were on the road again. Like always the road was not at grade and soon came a – let`s say little mountain – of 240m height. This was the highest peak of this day, not really exhausting. We came close to Panama City and traffic was getting worse, of course. When we reached the famous “Puente de las Americas” they had closed one line for the traffic, because of road works. So all the traffic had to go on line in and out of the city.

So the heavy traffic got even more heavy and made it hard for our bicyles to get noticed by all the cars and trucks.I had planned to take photos from above the bridge but when my wife saw the traffic she threatened me with getting divorced if I would take only one photo….Real dangerous felt the situation after crossing the bridge and entering the town itself.

Man, lots of the worst slums I ever saw and people on the street watching you like animals in the zoo. That really was scary, because we had read, that cars even lock their doors when passing through these streets and we pedaled as fast as we could. Thanks to “Garmin” it was easy to find our hotel, and I can confirm all the statements about cycling into Panama City: It`s unforgettable!!