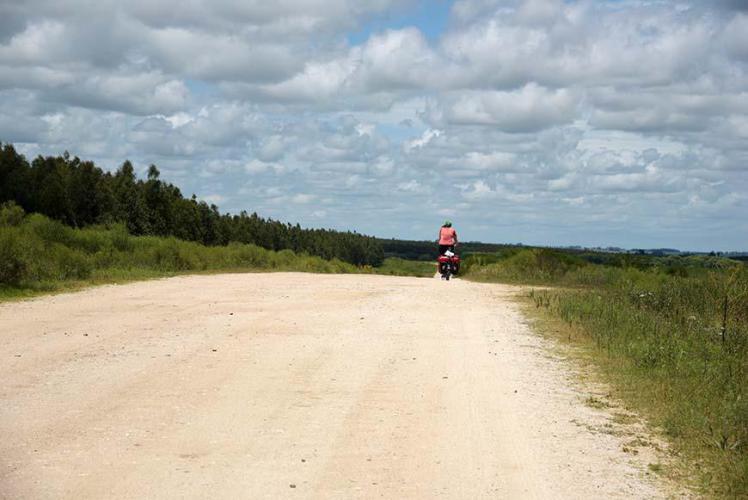 Today we did a long stretch of 140kms. We started very early in the morning at 6 o´clock with a pleasant temperature and cool, fresh air. Like always very little traffic, easy cycling.

As the sun came out, we suddenly had a huge, double rainbow in the sky above us-absolutely beautiful and we took it as a sign of good luck and protection. That was so awesome.
The road was going steadily up and down as always. Some funny things beside the road like this bike shed on the rooftop, but also some sad things like dead animals run over by cars.

Strange that with this little traffic in relation still you can see a lot of dead animals hit by cars. This really seems to be bad luck- to be hit by a car here is less likely than to win the lottery I guess!
But also again a lot of living creatures like birds, snakes or those capybaras, little waterpigs that look like beavers. They swim in the water, but if you get close they submerge and you´re not able to take a photo. Their relatives, the guinea pig you can see also very often. They are quite big here and always run across the road real fast. (Did they see some relatives with bad luck??)
After some 68kms, we turned onto a an unpaved dirt road with a lot of sand. Cycling was hard and we went so slow. First we hoped that this would be a short stretch, but it turned out to be like this for 32km. When we got back on the „normal secondary road“ it was already late and we were running out of water. A police station, where we had a break in between, was empty. Just a horse, some sheep and a black pig. No water.
Back on the paved road, after 4kms there was another police station. When we knocked the door, there was also nobody answering. But as the door seemed to be open, I guessed someone was there-maybe sleeping. I lifted the shutters of the window from outside and tried to do it with a lot of noise. And really, this had the expected effect. The siesta of the man inside (Officer?? I don´t think so. Maybe a house keeper) was interrupted and he came outside. In fact, he was very helpful and provided us with 4l of ice cold water. Salvation!!!
We had 36kms more to go, but now there was strong headwind-again we were cycling so slow like snails. With all the humps and all the kms in our legs this was really challenging.
When we finally arrived at Trinidad, it was already dark, but we found a hotel very quickly, its name is „Potenza“ which made us grin.
We had some steak and salad for dinner in a local bar, but almost fell asleep while eating. A tough ride today.