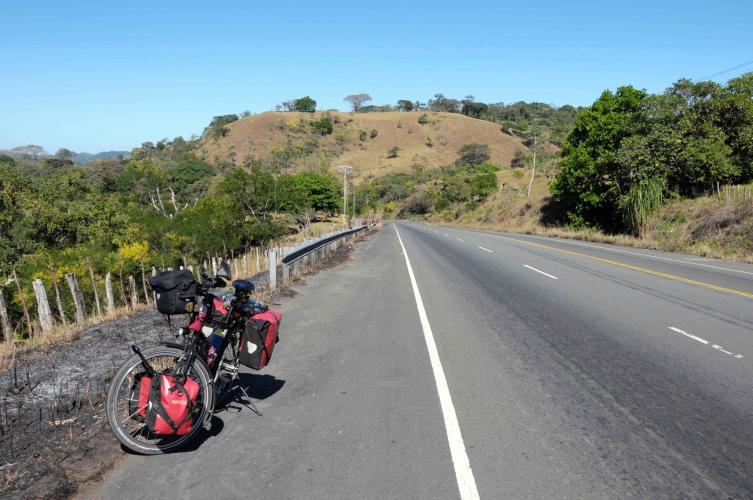 A long stretch without any accomodation possibility, so we already started in the dark at 6am. The early mornings provide you with fresh air and it`s hard to believe how hot it gets during the day. As soon as we reached the main road (still the Panamericana) the road began to climb up into the mountains.

Steady ups and downhills, and the ups were steep. After 30km right in the mountains we met a guy who did jogging in a long trousers/long sleeve plastic material jogging suit-unbelievable! The temperature was 44°C then.

Well, he told us, he was doing boxing and had to lose some weight before the next fight. What a great effort! Tough guy! We continued climbing and climbing and as we had a break in the shadow of a bus stop,there came an iceman on a small motorbike and the guy stopped to talk to us. He was very interested in the technical facts of our bikes and began to tell us the story of his life.

Every day he was going about 100km through the small villages of the mountains to provide everybody with his icecream,very sympathic the iceman.
We got on struggeling with the heat and the mountains, had to do a lot of breaks and in the end it was already getting dark and my wife was complaining a lot, because she hated to ride in the darkness on the Panamericana with all the trailers.

In the end 10km before Santiago, we found a hotel Called “Vista Lago” and decided to stay there.But we were unlucky again, because they were booked out! The italian owner Federico offered to call a spot close to his hotel. (Cabanias “La Ponderosa” about 2 km from there).

To organize a cabania and after all the key took about 2,5 hours and so at least in the meanwhile we could eat some pasta there.
The guy with the keys arrived at about 10pm and led us to the cabanias. Basic, but very nice spot.