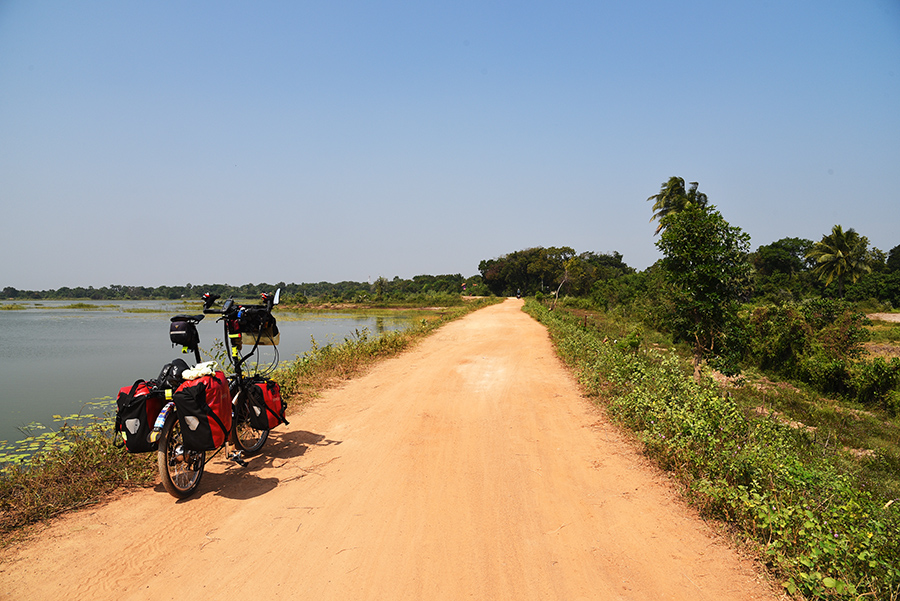 At 06:30 we were on the road again. The air in the early mornings is fresh and cool, we enjoyed.
As soon as the sun comes out, it´s hot, so soon we cycled with the assecoirs that are so familiar to us already: sun hat, sun glasses, sun screen and so on.

After leaving the main road we cycled on beautiful and quiet secondary roads. Small villages and really poor areas. The heat was exhausting and we did a lot of “shade-breaks” just to cool our heads down a little.Everywhere a lot of “Hellos” and “How are Yous”, friendly, happy people.

When we reached the main road again, there wasn´t too much traffic. nice, A Toyota Landcruiser HJ 78 , a very expensive car here, owned only by the super rich ones, made signs that we should stop. When we came closer soldiers and a higher rank military officer stopped us by saying: Stop, I want to talk to you”.

He was the major general of of all the military in this area, and we even found his name later in google His name is Duminda Kappetiwalana. His reputation is not undoubtful as we read later, but with us he was very friendly. He asked us to stop at his military camp in the next village and wanted to provide us with some drinks and food.

We thanked him a lot and he seemed to be so proud. He asked us from where we are coming, where we were going and so on. I think he also wanted to show us his good English. But anyway that was very kind and when we arrived in that village there was actually some soldier waiting for us. Lieutenant Wijesinghe Pathum offered us some cold drinks and some crackers.

The duty of his day was to wait for us. We really were impressed. He spoke good English, we talked a little bit, took some photos and said good-bye. Nice experience.
The road to Jaffna got more and more windy, you could feel the ocean. A modern road crossing the ocean was beautiful to cycle but a lot of strong headwinds made us slow.
It was just getting dark when we reached Jaffna and looking for a hotel was a little bit of an effort for us as we didn´t book something nor had checked the possibilities in advance. But google is everywhere and so we tried the one with reasonable prices and comments.

We cycled there through the town while it was already dark. Kind of an adventure. No street lights and and a tooting chaos. Cars, motorcycles, tuk-tuks, bikes – some with, some without lights -, pedestrians, dogs, donkies and whatever.

When we arrived they first said, that they were booked. Oh, big disappointment, and we were tired already. Then they suddenly said, they´d have a family room for us, and when we rejected they finally found a last double room for us. We didn´t really understand, but we were happy to have a room at the “Senthil Complex”!