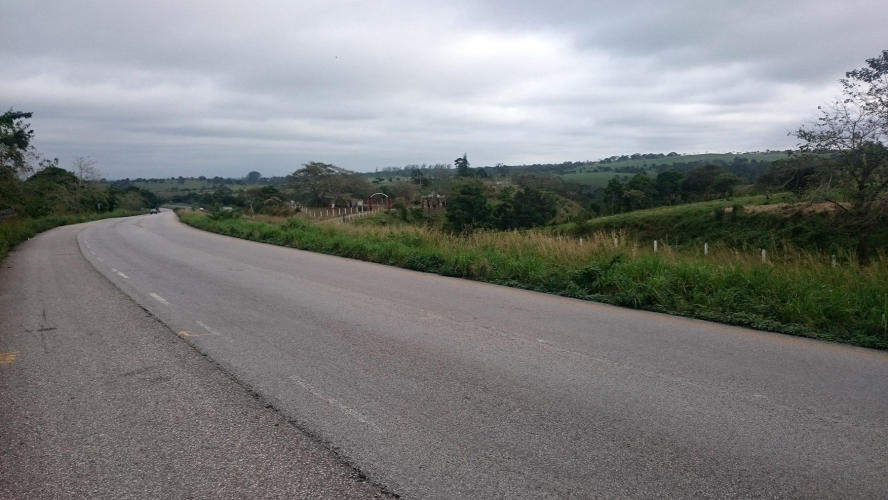 In the morning at 6:30a.m.I first went to the market to buy bananas.The weather was the same like yesterday, cloudy, but it wasn´t raining. I got the bananas and when I just was back in the saddle again it started to rain.

F…weather! The rain was much stronger then yesterday and I just hate it! The weather didn´t change until almost 13:00 and if this was not enough there was strong headwind. Sometimes so strong that I couldn´t go faster then 14km per hour. I was better prepair this time concerning the clothes. I wore a merino shirt and above my bike shirt. Although I was wet like hell, I wasn´t cold at all because of the merino, I just love it!!!
The last 50km the road was going up and down like so often, but today I really couldn´t enjoy it it at all!!! At least the road was surrounded by water and so I saw a lot of birds. In some villages children and teenagers were selling all kind of birds like very big parrots and also crocodiles. 20USD the parrots and 1USD the crocodiles.
When I got closer to Coatzacalcos I saw an industrial city with a lot of chemical factories and oil industry. Before you can enter Coatzacalcos you´ve got to cross a big bridge and cars even need to pay.
I went to the center of town to look for hotels. I tried the first one “Hotel Coatza Inn” but the staff (a lady) was very unfriendly and she wasn´t really happy with the idea that I wanted to take the bike inside the room – she got on my nerves. I said bye-bye and I found a nice, big room at “Hotel Parque Inn”.
When I was dry again, I checked my bike and I found the same spoke broken again. Holy shit! Maybe it´s becuase the guy tied it so strong or maybe it´s the wheel, I don t know. So tomorrow I need to find a bike shop again. Slowly this “spoke-theme” is going on my nerve.
I did my laundry and went to eat. Spagetthi bolognesa – they were ok.