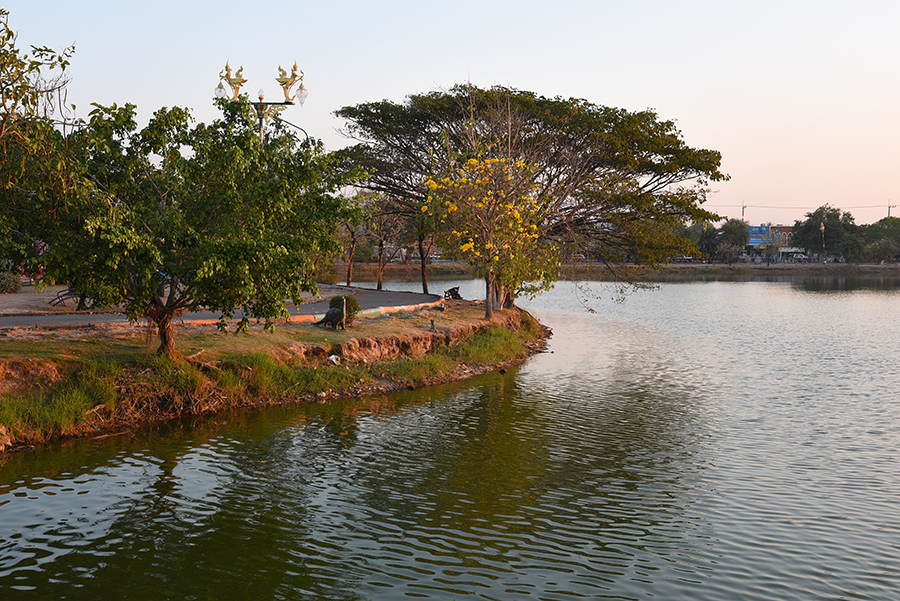 My inner alarm: at 6 o’clock I woke up. During the night I was awake many times. Maybe because yesterday I went to sleep so early.

At 7 o’clock I sat on my bike Friday pedaling again. I passed by a lake and I saw another of those beautiful Asian sunrises. Very nice to start a new day.
In the beginning I took the highway for a couple of kms.

After I went on a small road where first there was some traffic but after a while it got less. I passed a beautiful Wat and when I was taking pictures a Monk came up to me and tried to chat a little with me in his few english words.

Today „Google“ send me to a very, very small sandy road – a short cut. It was tough pedaling and I was thinking „if this road stays like this all the time I am not going to make it to my destination“. I was lucky. It went on like this for only 15kms.

It turned to be another paved small road where I was passing a lot of small villages. There were a lot of farms and all had a lot of milk cows. At one farm there was like a coffee shop attached and I drank a cold coffee with a lot of ice – really delicious.

What was a surprise today was that the hills came back. There were several to climb and in the end I did almost 900m of altitude.

At about 32km before my destination I had to go on highway number 2. First I was pedaling the wrong direction – which I realized immediately. Unfortunately it wasn’t possible to cross so I was riding the wrong way for some kms until I finally had a chance to cross.

Thanks God there were shoulders to cycle on. It was really loud and terrible to ride. So many trucks, buses and cars. A night mare.
5pm I arrived in the city of Sarabouri and I could find a nice room close to the train station. I took a shower and I went to eat in a real restaurant! The food was ok but hey – nothing special.

On my way back I visited the night market and I bought some pine apple and water melon. Tomorrow I think there will only be like 60kms to go so I easily could sleep a little be longer. I hope I will !!!