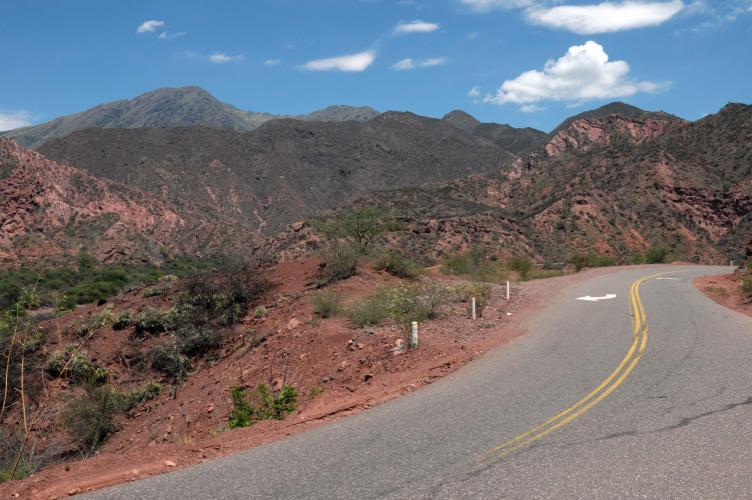 We started riding at 6.30am with our bellies still full from the barbecue last night.The road was still quiet with not much traffic.Beside the road there were a lot of tabacco fields, and where the leaves were hung to dry,you could taste the fresh smell of the future cigarettes.

We arrived at the entry of national park “La Quebrada de las Conchas” which is famous for its geological formations of red sandstone. The Quebrada is a 75 km long valley with an awsome landscape and fantastic views.About noon we passed a village called “Alemania” and it seemed like an forgotten place where time stood still.We looked for something to drink and found a guy who sold us a bottle of warm sprite.We had asmall chat and he told us that since the last time that the train passed here in 1973,there was no electricity, no shops-just nothing. There were living only 5 families there.Although the guy seemed pretty happy with his life and didn’t consider it as very hard.

Riding on through this fantastic landscape we saw a small sign advertising for empanadas and we stopped. We had lovely homemade empanadas in the shadow of a big tree and as a desert some figs. Funny that the lady told us to come and eat again anytime we should be near.Obviously she didn’t notice that we were just tourists.

The road was hilly,going constantly up and down and the temperature was rising up to 40°. The last 20 km we had headwind and as we had many breaks for taking pictures we arrived at Cafayate at 7pm.Unluckily, like in Tilcara there was a famous folk festival in small village nearby, so all the hotels and any place to stay were fully booked.After riding two hours through the city asking anywhere for a place to sleep, the only free room in town was a quite expensive room in a nice,colonial hotel called “Killa”.We unloaded the bikes,took a shower and went for dinner.