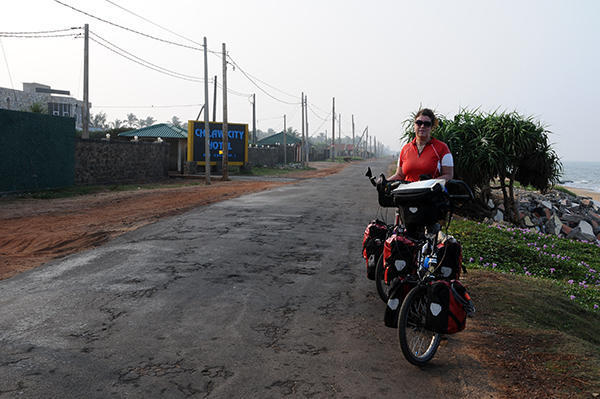 LEFT”>As the “Chilaw hotel” didn´t serve breakfast we left quite early and had some bananas on the way. Like yesterday we cycled on secondary roads after a short stretch on the busy main road. Half of the way was an unpaved road, just red sand, but thanks to god it wasn´t so deep that the bikes would sink into it.

The scenery was beautiful, hardly any traffic. From time to time a small motorbike accompanied us for some kms, and the driver so proud to show his english language knowledge. In fact, these conversations were quite hard, because the english was far less than basic. “Where you from/where you going/have children/what name and bye bye” were the most spoken sentences, behind that – nothing. But as people are real friendly here the felt themselves somehow obliged (or could be they really liked it) to stay beside you and smiling friendly each time you looked at them.

Throughout the ride there were voices just from everywhere beside the road yelling desperately “Hello,hello” to us hoping to get back a simple “good morning or hello” which made them happy. Especially the kids were really enthusiastic-waving their little hands without a brake while screaming “hello,hello” towards us. Sometimes I put my red clown nose on, which made them almost piss in their pants for laughing and we still heard their giggling after we had passed by. They are so cute.

We passed a muslim village, and as it was friday, the imam already sang his prayers through the speakers, which felt kind of weird-like in an arab country. People already were on their way to the mosque. The men in white kaftans with the typical cap of the muslims, the women all in long black clothes. We thought the majority of the people here were buddhists and hindus, but in fact the majority is christian or muslim. Hindus and buddhists only some percentage.

In the end we arrived in Putalam without problems, but the guesthouse that we had booked was far away from the city center and we didn´t like the room too much (Dhammiak hotel). We decided to check out another of the three options in town. The next one, the.Ranketha guesthouse, we found even worse. More expensive and it seemed to be all run down. So we went to the guesthouse close to the center. The room was basic, but they had a nice restaurant attached which served good rice and fish curry dinner.