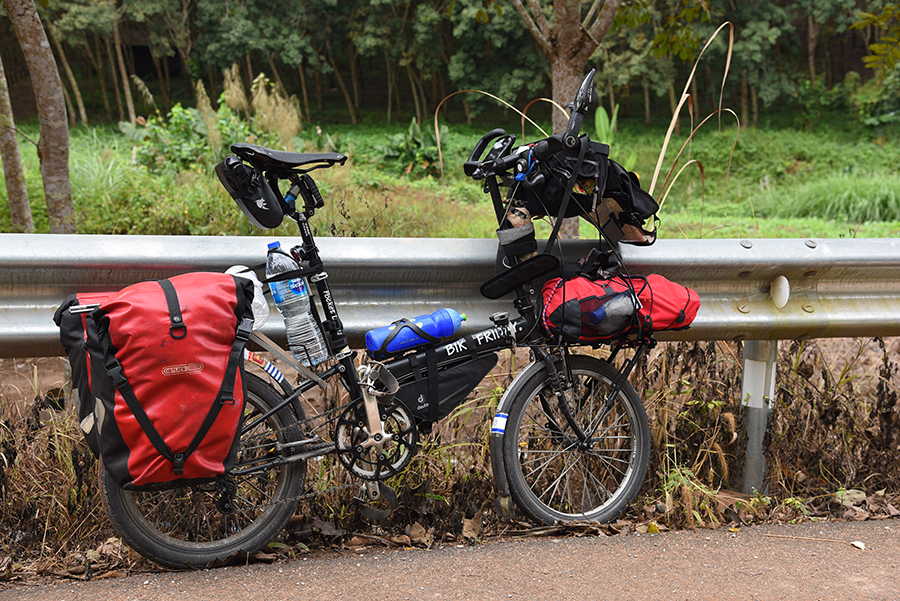 My alarm clock rang at 6 o clock exactly together with my friend the rooster, just like a choir. At half past four I already heard him practicing for this perfect 6 o’clock performance, so I had the pleasure to enjoy the voice of this lovely animal for the second time now. I guess I’m going to miss him….

At 7 o’clock I was already pedaling. Today I’m on my way to the Laos border.
I could find the road out without problems. I used the pedestrian mode while navigating with Google, so I could take some short cuts and go on secondary roads.

According to google I should reach my destination in about 90km but everyone knows that sometimes shit happens. Today should become an adventurous ride….

First everything was going ok. I was riding through a lot of small villages. The landscape was very rural and really nice – just not many places to buy food or have some ready made street food. Sometimes very poor villages with almost no shops.

About 1pm at a junction I googled where to go and it was left. The road was like a path with a lot of mud. I went on for about 400m but then decided to go back. It seemed not to be the right way. I reached the main road again and there was a girl I could ask for the way to the Laos border.

Unfortunately she couldn’t speak any English, we communicated using the Google translating program. That felt kind of funny and weird at the same time but finally she told me to go the other direction……

I checked it again with „Maps me“ and got shocked. I saw that the remaining stretch to Chiang Khon, the Thai border town, was still 60km away!! Holy crap I thought, this must be wrong somehow. I decided to go back the same direction according to the Google suggestion.

In this moment a lady caught up with me on a motorbike. She said that the village people had told her that I’ve shown up with my bike at the damned junction already twice and she wanted to help.

She told me that the Google suggestion will not be possible to ride because these paths had been closed already 5 years ago. This wasn’t exactly good news as it meant 60km more to go for me! F…!!! But what the hell can you do? Ride on….

The small road I cycled now went on to the main road. At least this was the right way, but it should keep climbing up and down for all these next 60kms – sometimes real steep like 16%. It was very hard pedaling, besides I didn’t eat much the whole day. Only 4 bananas and 2 bags of chips.

In between, while riding up a very steep hill I was going so slow that a guy with a pick up drove close to me and offered me a ride to town. I really was about to say „yes“. Only my inner ego said „no, you want to go down these hills“. I do love to speed up going downhill but today in the end I only managed to get 68km/h.

It got already dark when I arrived at a place called „Nam Khong Guest House“ at the roadside and got a room there. I quickly took a shower and went to eat. I was hungry like hell.I ordered spaghettis with  chicken and some extra rice above.
At 9:30 I fell into bed.