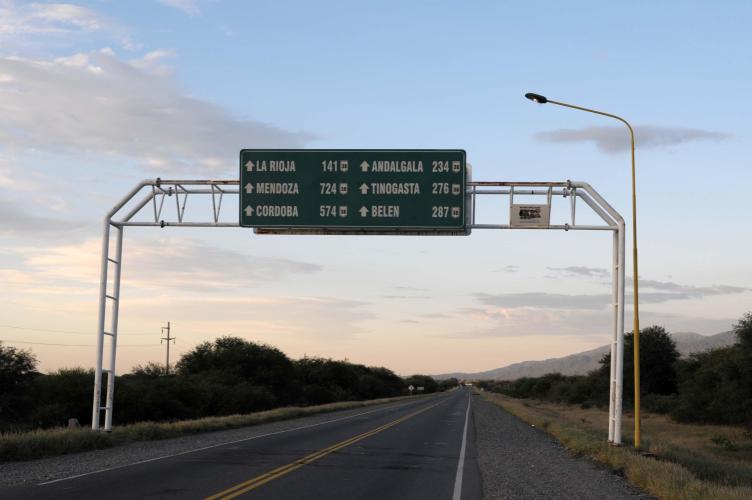 We started early at 6:30am.Getting out of the city was easy,that early there was not much traffic-only some party people from the fiestas the night before.The sun was rising slowly and we could get quite a good impression of what was waiting for us today. About the route we didn’t have much information but it seemed easy to find the way.Besides we had two maps: an argentinian one and a german one, „make assurance double sure“!!

We passed very few villages with very rare occasions to buy something.A Water melon seller at the road was a good chance to eat and drink. We bought two water melons and continued. It was hot,hot,hot, always straight and almost no traffic.When we found a litle shade,we stopped and had the melons for lunch.Our next stop about 60km before La Rioja was at a gas station where we wanted to buy water but they only had one bottle of sparkling water and two little cokes left.We didn’t worry about,because according to the german map there should be a village in between on our route.

Temperature was rising up to 50°C, the rivers were all dry and there were a lot of dead cows and horses on the side of the road-we counted until 13, then we stopped counting.It seemed a little bit unreal: the unsupportable heat,all the dry land,animals that obviously died in search of water,vultures flying high above and an empty road that kept going straight with no curve at all.In the end the small village,where we wanted to get water turned out to be ghost village.There was actually nothing and all seemed abandoned.We were running out of water and had 45km more to go in the heat.

There was almost no traffic but we could stop one passing pick up and the driver gave us one liter of hot apple juice what was better than nothing but actually left us a lot of thirst because it was so sweet.We continued riding slowly and our tongues kept sticking at our palatines. 25km before La Rioja we tried to stop a car again and although it was passing us by at first it turned around and stopped finally.The drivers,a young couple,were very friendly an gave us 5 liters of fresh,cold water!It felt like winning the lottery!We had a break,drank a lot, and started off for the last kms to La Rioja.

When we came close there was a police check point, and the cup stopped us to ask where we were coming fom.He couldn’t believe we were coming from Catamarca and made sure our answer three times. Finally he just welcomed us to La Rioja and we could go on.Thanks to our Garmin GPS we could find our hotel very fast.The danger we had to pass through on this amazing day was a big Stafford Terrier chasing my wife when she was passing its house.I emptied all of my pepper spray to rescue her from the monster.A very special last day of riding!