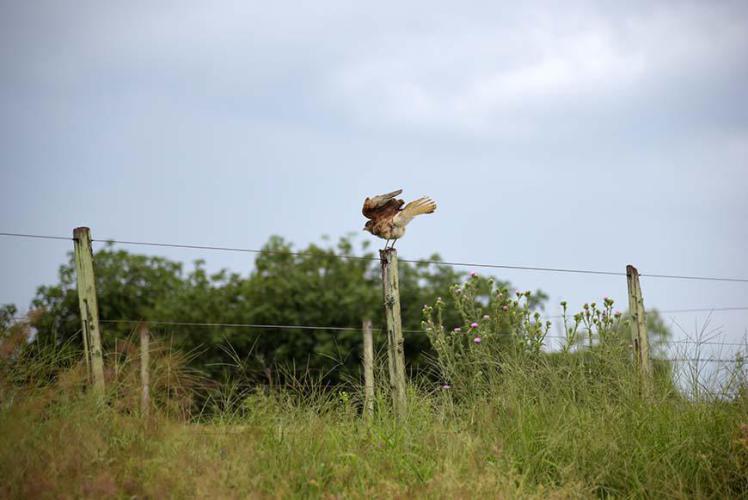 We started in the morning with rain and low temperature. Soon we found a nice secondary road, unpaved and leading right through the fields.

The rain stopped and we had that nice smell of humid ground that occurs in nature after a rain shower.
All kind of birds, flowers and of course a lot of horses and cows along the way.

As the sun came out, it got really hot. Temperature was rising to 42°C and we pedaled on a paved road now, but still very little traffic. At the little town of Dolores we chatted a little bit with a gaucho who was also on the way with his bike. He told us a little bit of his life and about his very special philosophy: “Hay que tomar”, which means “One has to drink”. With this secret of life and two liters of wine every day – one at lunchtime, then siesta, and one in the evening – he found himself growing old in health and satisfied with life. So you see, it´s not so difficult to lead an easy life.

With this wise advice we pedaled on like happy, and as if this guacho with his philosophy that one just has to drink was somehow right, like in the famous commercial of Coca Cola, a Coca Cola truck appeared on the roadside. The driver just had a break. We stopped and I asked if he could sell us a Coke, and the driver gave us two big bottles of 2,25l for free-that was so cool. You just have to drink!!

We went on and arrived in Mercedes, which is the capital of this province “Soriano”. Although it is the capital, there is nothing going on there. We found a simple hostel, with a more than simple room, run by some old people with hearing aid, that didn´t work too good-so they were talking very loud all the time. It was kind of strange, but at the same time fun.
In the evening we had dinner at the main plaza which was as quiet as the whole town except our hostel owners.